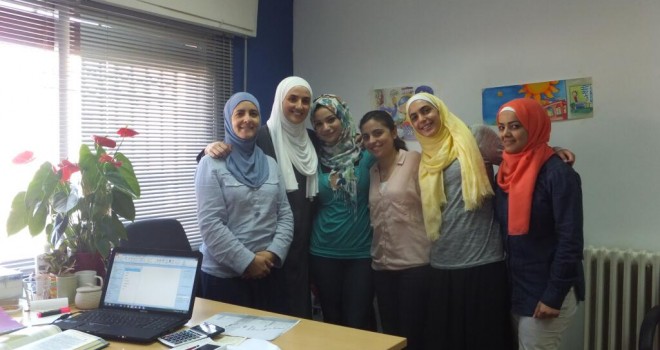 “We love reading” [1] aims to develop and build a society that loves to read. It has the ambitious mission to establish a library in every neighborhood in the Arab world and is training individuals to read out loud to children aged between 4-10 years in their neighborhoods, as well as providing appealing reading material and organizing storytellers [2].

Rana Dajani wants a library in every neighborhood

We’re accustomed to seeing people reading for pleasure wherever we go: on the subways, in airports, at the beach. We take it for granted: reading as one of our main forms of entertainment. But Rana Dajani [3], a biologist who spent much of her childhood in the U.S., didn’t realize how much it was missing from her homeland in Jordan until she was back, raising her own children [4].

“There was a survey done by the Arabian news,” she told me, “that stated Arabs read on average half a page a year compared to eleven books a year in the U.S. But it is a common observation that no one read, and I only did. Also my daughters, they only read.”

She added, “My daughter once said she can’t wait for a day when her class mates don’t ask her why she reads but what she reads.”

In Jordan, Saudi Arabia and elsewhere in the Middle East, she said, people read for study, for school and for their jobs. But not for pleasure.

Reading for pleasure was such a key component of her own life, and that of her children, that Dajani felt she had to do something.

She invited a small group of children in her neighborhood to gather and listen to her read stories aloud to them.

“I thought of inviting children to my house at first,” she told me. “But that wasn’t an option for the long term. We needed a public place, where the children and their parents would feel they were safe.”

The obvious place was the mosque. “By implementing our initiative in local mosques,” Dajani said, “we are essentially turning mosques into community centers opening the doors to everyone. In the Middle East, the idea of reading to a child is a new concept, as there is little emphasis on reading for pleasure outside of academic or religious contexts. We are transforming these attitudes by inspiring children and their parents to read for pleasure.”

It is now five years since she launched her program. We Love Reading has since sprouted reading groups and homegrown libraries in towns all over Jordan, as well as Lebanon, Saudi Arabia, the United Arab Emirates, Tunis, Turkey and expanding beyond to Malaysia. “I train someone and tell them don’t pay it back, but pay it forward,” she said.

How did it all start? “I wanted to be a physician,” Dajani told me. “Then I decided after my freshman year at the university that it was too much responsibility. What if I made a mistake? Science was safer. Also being a scientist, I would be on the edge of a frontier.

“During later years, at the university, I enjoyed topics related to molecular biology; it was like uncovering the mysteries of the world. So it was only natural to study molecular biology.”

She finished her bachelor of science and master of science at University of Jordan. There were no Ph.D. programs available, so Dajani applied and was accepted for a molecular biology program at Cambridge University. She was not able to attend because of lack of financial support. “I was also told in my acceptance letter from Cambridge, that having a child would impede my studying,” she said.

Ten years later, married with four children, she won a Fulbright Scholarship and went to University of Iowa to do her Ph.D. Dajani is now a professor of molecular biology at the Hashemite University in Jordan.

“Actually my children were an asset,” she said of her educational experience. “They helped each other. They depended on each other. My husband was a great support coming with me to the states to support my dream.

“I would ask my children their opinion on hypotheses, and my daughter would come into the lab and be my assistant, when I would have to stay up late into the night with my mice. They brought perspective into life.”

And she taught all her children to read for pleasure. Once Dajani was back teaching molecular biology at Hashemite, she resolved to do the same for other children.

And We Love Reading has taken off. Kids start at age 4, and often participate until they’re 10 and older.

“At the beginning, it was word of mouth and then the TV video and radio interviews gave more publicity,” Dajani said. “I was also invited to speak which helped spread the idea. In the Arab world and in Jordan especially, among rural areas.”

The Internet has helped a lot. “We have a website forum. I am also working on a mobile network. We are looking for financial support for the mobile network.”

I asked Dajani, what ultimately is her hope for We Love Reading as it becomes more popular and contributes more lastingly to children as they grow up to become the next generation of teachers, business leaders and political leaders in Arabic countries?

“Reading will enable these children to think outside the box, find and create better solutions,” she said. “To understand other people’s perspectives, respect others and learn to listen. Most of our problems are miscommunication. Learning from other peoples experience will enrich our collective experience.”

Dajani says the idea of community involvement and volunteerism outside the immediate family is a new concept in Jordan, especially for women.

“By providing training to women, we give them the confidence and skills they need to successfully expand our model while fostering ownership and social responsibility.”

We love Reading’s homegrown libraries also become platforms for dissemination of awareness programs, such, as environment and health.

“The biggest problem is reaching the grass roots effectively,” she said. “We do that.”

Dajani’s dream – to see the We Love Reading project expand beyond her neighborhood – became a reality a few years later [5].

“In 2008, I won an award from Synergos [6], which is a New York-based organization that fights poverty and injustice in the world. They have started a program called ‘The Arab World Social innovators,'” she says. “So I won the award and that provided me with enough funding to be able to start a training program for ladies in their local neighborhood. We would train them how to read aloud. The fund also gave me the ability to buy them books. I would buy 20 books for every lady. We’ve trained 380 ladies. This training for the ladies hasn’t just given them the ability to read aloud, it has empowered them to be civically and socially responsible outside their home.”
Eighty local libraries have been established in communities throughout Jordan, serving more than 4,000 children.

Dajani joined other activists, academics and private citizens from around the world at the 2010 Clinton Global Initiative [7] conference in New York. Each year the organization  – which was founded in 2005 by President Bill Clinton – brings together dozens of innovators who  work to solve community problems in sustainable and effective ways[8].
Dajani says her participation in the 2010 Clinton Global Initiative conference gave her the opportunity to further expand the program, and gain valuable insights into social activism.
“I met women from different areas of the world: from Latin America, Africa and Southeast Asia,” she says. “And we’ve actually set up partnerships with these different women, like they’re planning to copy our model in Indonesia, Peru and, hopefully, in other Middle Eastern countries. On the other hand, I’ve also learned about how people are facing other problems, how people are working in teams to solve problems such as women’s economic independence, such as environmental awareness. So it’s been an eye-opener on how everybody plays a role in trying to make this world a better place for everyone.”
During the conference, We Love Reading made a commitment to establish 100 more libraries throughout Jordan over the next five years. Visitors to Rana Dajani’s website can learn how to create a library in their neighborhood.

Recently, We Love Reading has been chosen along with MIT open courseware to be a case in the book “Innovation in Education” commissioned by WISE Qatar foundation by Charles Leadbeater. It was published in 2012. We Love Reading was described as a movement. Find attached excerpts from that book [9].

How to get involved and support We Love Reading ?

[8] Clinton Global Initiative, A Library in Every Neighborhood, 2010


← From Sindbad to Sci-Fi: Reimagining Arab Science Fiction
Introduction to Islam and Science 1/5 →