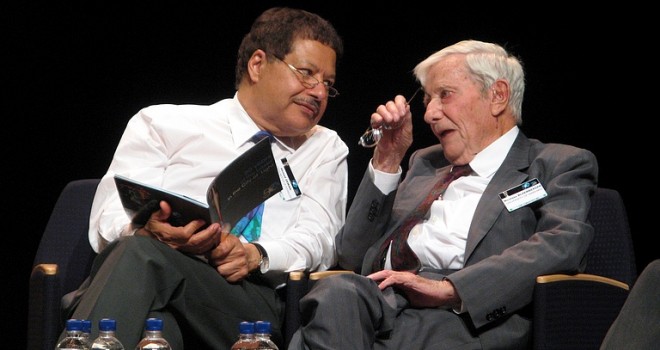 A famed Egyptian-born scientist has challenged journalists in the Arab world to dispel what he called a widespread and biased idea that Islam is anti-science. Dr Ahmed Zewail, a 1999 Nobel laureate in chemistry, was speaking June 27 at the start of the three-day World Conference of Science Journalists in Doha, Qatar.

“There is nothing fundamental in Islam against science. It is all part of the unfair perception about Islam and Arabs in general,” Zewail told about 700 listeners during a keynote lecture to kick off the conference. He said journalists in the region bear part of the responsibility to help shake off this negative impression.

He urged journalists to pressure especially Western governments to support basic research and education in the developing world, explain the value of science as the precursor of development and highlight success stories to serve as motivation.

Zewail, the Linus Pauling Chair of Chemistry and Professor of Physics at the California Institute of Technology, pointed to 21st-century advances in science, especially the revolution in communications and linked them to the Arab world.

“Today, we are able to visualize and control matter to some extent, decipher the genetic code, direct stem cells towards the making of new organisms and build telescopes that can look back into time. I was personally involved in the Egyptian Revolution, entirely communicated to the world from Tahrir Square through cell phones, Facebook, IPADs and so on. In my generation, we would have used stones, sticks and guns,” he said.

He suggested that research groups like the 15-year-old Qatar Foundation, which is hosting the WFSJ conference itself, are an indication that Arab countries are science-friendly. And his native Egypt has plans to create a science and technology city.

He said information on the Web is not always informative, and the media in general too often opt for sensationalism rather than serious reporting.

Right after he spoke, panelists at a session on “unveiling Arab science,” argued that science and Arab science reporting operate amid unique cultural, economic and religious limitations. Several Arab journalists and researchers agreed their work is frequently hampered by existing tensions between belief and reason.

To illustrate the point, almost none of those interviewed agreed to be identified, but all said science and science journalism in the Arab world was hampered by autocratic regimes – the reason for their reluctance to have their names published – weak infrastructure and inadequate scientific publishing.

But they otherwise tended to agree with Zewail. Moroccan journalist Fatima Yassine said Muslim scientists and scholars have a range of viewpoints on the place and role of science within the context of Islam.

“But the Koran speaks about science clearly and in positive terms in some verses. The Prophet Mohammed also mentions and encourages science several times in the Holy Book. The pursuit of science in general is not in disaccord with Islamic teachings and religious belief, unless [the science] is rooted in evil intentions,” she said.