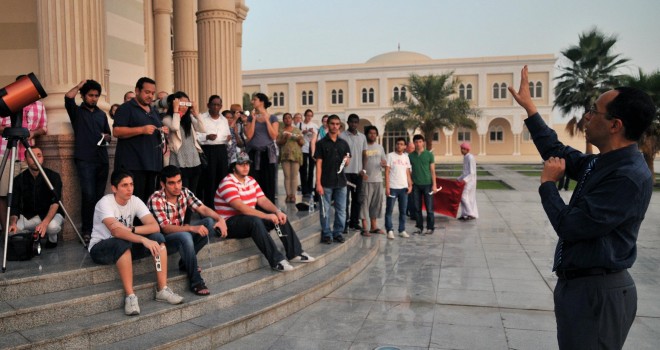 On July 16, 2014, the UAE leadership made a stunning double announcement: the creation of a UAE space agency and an unmanned mission to Mars by 2021, coinciding with the 50th anniversary of the nation.

The communique carried statements by President His Highness Shaikh Khalifa Bin Zayed Al Nahyan explaining the purpose of this great initiative: “to build Emirati technical and intellectual capabilities in the fields of aerospace and space exploration, to enter the space industry, and to make use of space technology in a way that enhances the country’s development plans.”

The announcement, the project, its seven-year deadline, and these specific words reminded me of US President John Kennedy’s “to the moon” speech in 1962. “We choose to go to the moon in this decade… not because [it is] easy, but because [it is] hard, because that goal will serve to organise and measure the best of our energies and skills, … that challenge is one… we intend to win…”

But besides being a hard challenge, some may wonder why a country like the UAE would want to spend billions of dirhams in this way, unless there are some important benefits and grand objectives that will serve and perhaps even transform the nation.

Indeed, there are many such important advantages and grand objectives. Before I come to what I personally see as the greatest goal behind such a project, let me briefly mention what are usually presented as the main benefits of space programmes.

Space advocates and enthusiasts often present long lists of “spin-offs”, technologies that we now use in everyday life that were originally developed for space programmes. These include bio-medical techniques, imaging technology digital systems, robotics, information and communication technology, and applications in meteorology, environmental monitoring, remote sensing, surveillance, and more. There are, without exaggeration, hundreds of such spinoff applications of space projects.

More generally, space programmes lead to the development of an industrial base, to more research and development (R&D) within partnering companies, to the creation of new jobs, with trainings and improvements in the technical competencies of the workforce. Space projects often allow companies to enter new markets with space-related products, such as special batteries, lightweight solar panels, etc. Robust national space programmes end up raising national standards of living, both material and cultural, and set up regional or international cooperation.

But the way I see things, the main objective behind such a national initiative is educational and cultural. Indeed, this project will turn everyone’s attention to space, science, and technology, particularly students, in the UAE and the rest of the Arab world, as well as the media. It will also give a boost to other such projects, e.g. astronomical observatories in the region, which we have been working for. In fact, Shaikh Khalifa put this as a challenge: “We will prove that we are capable of delivering new scientific contributions to humanity.”

Fewer than ten per cent of the countries on Earth have space programmes. In most countries, students, teachers, and scientists cannot dream of becoming astronauts, astronomers, or space scientists/engineers, let alone making new scientific contributions to humanity. This dream can now become a reality for the many youngsters who often ask “how can I become a space specialist?”

A 2003 study showed that in the decade following Kennedy’s announcement and challenge, the number of PhD holders in the US tripled in the physical sciences and quadrupled in engineering. And a 2009 survey found that 50 per cent of the internationally renowned scientists who published in Nature (one of the highest rated journals in the world) had been inspired to become scientists by the US moon programme.

One should not be surprised then to note that Nasa has 75 educational programmes for students from kindergarten to college, including: Spaceward Bound, which trains students and teachers by exploring remote and extreme environments on Earth that resemble those of the Moon or Mars; the Nasa Academy, an intensive ten-week leadership development project for highly motivated and successful students; internship and scholarship programs; and the Endeavour science teaching certificate. Activities range from building rockets to spacewalks.

Indeed, space exploration has motivated millions of youngsters to enthusiastically engage in science, mathematics, and engineering subjects in the aim of taking part in programs that utterly fascinate them. So far, over 2 million teachers and 43 million students from 49 countries have participated in experiments and activities associated with the International Space Station.

I hope and trust that this great UAE space initiative will have education, the media, and the public in centre of its programmes. Students, through research grants and awards, should be invited to contribute ideas, designs, experiments, tasks, and goals. Imagine if the UAE Mars spacecraft were to take a stunning picture from a camera designed by an Emirati student or find organic compounds or microbes using a device that had been contributed by an Arab scientist.

To paraphrase a famous quote, I believe this initiative is not about the destination, Mars, but rather about the journey, the development of science, technology, and education in the region. What great times lie ahead!


← Hello aliens; anybody there?
Are planes crashing more frequently? →