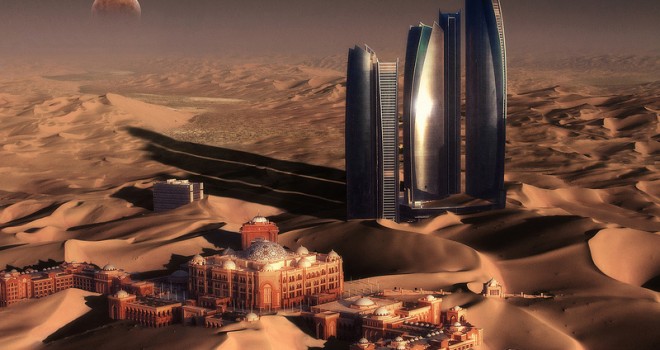 Hello aliens; anybody there?

Most people, from having watched so many science-fiction and alien movies, I think, are convinced that there are intelligent and advanced extra-terrestrial (ET) species out there. When pressed for an argument, they often reply that it does not make sense to have zillions of galaxies, stars and planets, all devoid of intelligent life. As a character in the (great) movie Contact put it: “If it is just us, seems like an awful waste of space.”

I am often asked whether I believe in the existence of extra-terrestrials. My immediate reply is: “It is not a question of belief; it is a scientific question, just like ‘are there black holes’ and ‘are there exo-planets’, and it must be addressed by rigorous scientific research.” Of course, I realise that the question also has a philosophical, existential and even a theological aspect: Did God create this whole universe for only one species (us), or are there many others, some of whom perhaps are much more intelligent and advanced than us? What would that imply?

The first attempt to address the question scientifically was made about 50 years ago when Frank Drake, an American astronomer and pioneer in the field, assembled a group of scientists to try to come out with a programme to address the question. And just to kick-start the discussion, he listed the factors that determined the probability of existence of intelligent extra-terrestrials: The number of planets around other stars; the fraction of those that could support life and produce intelligent, technologically advanced civilisations; and how long these could survive and be detectable by us. Multiplying those factors gave what is now known as the Drake Equation, which has become one of the most famous equations ever.

However, as anyone reading this short list of factors will soon realise, it is difficult to quantify them precisely and so the result was (and still is) — the number of such ET civilisations is somewhere between “only one” (humanity) and millions. The only way to find out was thus to search. And so was born Seti — the Search for Extra-Terrestrial Intelligence programme, which consists in scanning the sky for any radio or laser signals containing a message. Fifty years of searching has yielded nothing. The cosmos is huge; signals could be coming from very far (and our equipment is limited); and it is difficult to analyse all the radio emissions that we detect from the galaxy, let alone the rest of the universe.

Bring in crowd-sourcing — even before the word was coined! In 1999, the public was called upon to participate in the SETI@Home programme by downloading software that makes a person’s computer analyse Seti data (from the host, the Space Sciences Laboratory at the University of California, Berkeley) any time the computer is idle. More than five million people have participated from all over the world (233 countries), logging over two million years of computer time. Still no ETs.

There is a whole line of debate about this “eerie silence” (as Paul Davies elegantly summed it). The great physicist Enrico Fermi had, from the start, asserted that aliens do not exist, at least not in our galaxy: “Where are they?”, he asked. By that, he meant that if aliens existed in our galaxy, they would have had millions or billions of years to develop higher intelligence and technologies, they would have already found us and their presence or passage would have left some traces. This became known as the Fermi Paradox and many books and articles have been written about it, supporting or rebutting it.

One of the counter-arguments to the Fermi Paradox is that perhaps those highly intelligent species have not noticed us (since we have only recently emerged and become somewhat advanced) or perhaps they are just not interested in visiting us.

However, if they do not come to us or contact us, perhaps we should go to them or at least contact them. Indeed, the first few spacecrafts that we sent out through the solar system, Pioneer 10 and 11 (launched in 1972 and 1973, respectively) and Voyager 1 and 2 (both launched in 1977), all carried plaques with information about us and our planet, analog discs (1970s technology), with explanations about how to read the discs. But these spacecrafts have a very long way to go, having in 40 years travelled one per cent of the distance to the nearest star.

The more plausible method for reaching out to aliens, an approach known as Active Seti, is to send out radio signals and laser beams with information about us. Stephen Hawking, the famous physicist, has warned against doing that, for our civilisation will then be in danger of invasion by far superior alien species.

Still, last month, Nasa announced that it will upload a digital message from humans to aliens on its New Horizons spacecraft, which is due to arrive at Pluto next year (still very far from any alien territory). The public will soon be invited to suggest items for inclusion in the message and a panel will extract the most interesting bits to include in the 100-megabyte “sampling of life on earth”.

It will take centuries or millennia for the New Horizons message to reach any aliens, if it ever does that is. By that time, that information will be more than obsolete. This message is thus really for ourselves. By searching for aliens, we are in fact asking: “What is our place in the universe” and “Why are we here”?

Contrary to what sci-fi movies tend to imply, we must always keep in mind that aliens, if they exist anywhere, may not resemble us, in form, technology, philosophy (intentions), etc. It is then even more fascinating to think about them and about any contacts with them.