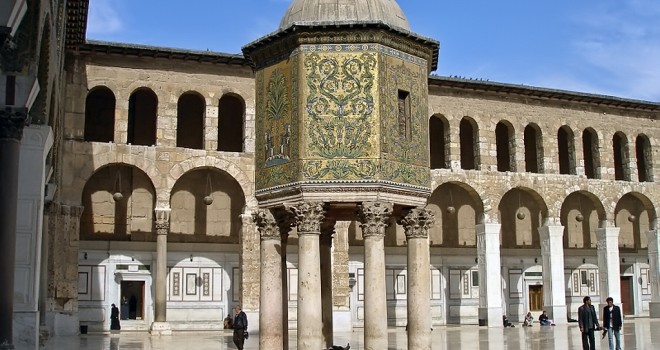 Looking back on the Golden Age of Muslim Science

With Syria in an almost apocalyptic state of civil war at the moment, it’s hard to remember that Damascus was once one of the great world centres of science. In fact, in what were called the Dark Ages in Europe, the Muslim world as a whole, including Damascus, laid the foundations for modern medicine, biology, maths and chemistry. Yet in modern times, the Muslim world, with 20 per cent of the world’s total population, generates less than 5 per cent of its science. So what happened to what’s known as the Golden Age of Muslim Science, and can anything be done to revive it?

MARK COLVIN: With Syria in an almost apocalyptic state of civil war at the moment, it’s hard to remember that Damascus was once one of the great world centres of science. In fact, in what were called the Dark Ages in Europe, the Muslim world as a whole, including Damascus, laid the foundations for modern medicine, biology, maths, chemistry and more. Yet in modern times, the Muslim world, with 20 per cent of the world’s total population, generates less than 5 per cent of its science.

So what happened to what’s known as the ‘golden age of Muslim science’, and can anything be done to revive it? Jim al-Khalili is the author of Pathfinders: the Golden Age of Arabic Science. I asked him first about the reasons for decline.

JIM AL-KHALILI: The simple ones are things like the Mongol invasion, which destroyed so many of the libraries of cities like Baghdad, or that there was a turn towards a more orthodox, conservative version of Islam, which saw science as a threat.

But I think the reality is that, you know, civilisations rise and fall. We don’t ask, ‘What went wrong with ancient Greeks?’ The Greeks were so clever, these great philosophers, why did they go into decline? I think there are times when these great empires rise and flourish and go through a golden age, and then they go into decline, and the baton of scholarship and knowledge and advancement is taken up by another culture, another civilisation.

MARK COLVIN: On the other hand, the Greeks did fall, but they sort of passed a lot of it on to the Romans, didn’t they? There was a continuity there. Where did Arabic scholarship go?

JIM AL-KHALILI: There was a continuity there as well. The golden age began when the Islamic empire became obsessed with getting hold of that Greek knowledge. They were well aware of the work of Aristotle and Plato, the astronomer Ptolemy, the physician Galen, and so on; Euclid, mathematics. And they translated those texts into Arabic, and then advanced on them and improved on them, and produced their own independent knowledge.

And then there was another translation movement from the 11th century onwards back from Arabic into Latin. So when Europe awoke during the Renaissance and scientific revolution of Copernicus and Galileo, now it wasn’t in a vacuum, that wasn’t out of nowhere. That was because this knowledge had been preserved, had been passed on and improved upon via the Islamic world, returned back to Europe.

MARK COLVIN: And so when we practice algebra, we use the word algebra, most of us are completely unaware that it is actually…

JIM AL-KHALILI: This was from the title of the book – The Book of Completion – ‘completion’ being how in an algebraic equation you move X and Y from one side of the equation to another that we learn at school. The Book of Completion in Arabic was Kitab al-Jabr, and al-Jabr was the title of a book. And, in fact, the author was a Persian mathematician by the name of al-Khwarazmi, whose latinised name, al-gorithmus, gives us another word that we use, take for granted now – algorithm.

And so his name gave us algorithm, his book title gave us algebra. And there are many other examples of words that we use today that come from the Arabic.

MARK COLVIN: And yet, when you look at the figures now, the number of papers, the number of Nobel Prizes – you measure it any which way you want – coming out of the whole

Arabic world is incredibly low compared to most other parts of the world. What can they do about that?

JIM AL-KHALILI: Well it takes time to change hearts and minds, to get people to be less suspicious about this, to just be curious about the world around them, and develop a spirit of – a free spirit – of rational inquiry.

The first step is, obviously, you have to pour money at the problem. In the same way that the Renaissance wouldn’t have begun in Europe without the help of the money of families like the Medicis in Florence. So countries like Saudi Arabia and the Gulf, which we do still see as very conservative in terms of religion, are nevertheless creating big research institutes and universities.

What is next has to be done is to get the general wider population to see the benefits of science beyond just as a driver for technology and the economy, but simply to be curious about the world. That sort of thing takes time.

MARK COLVIN: But will it work if you’ve still got a really fundamentalist framework which totally discourages free thinking?

JIM AL-KHALILI: No. This is the concern. This is the worry that those who see somehow the pursuit of knowledge for its own sake as somehow being against their religious belief, that is a threat to progress. And it needn’t be like that.

If you think back to this golden age of science in the Islamic world 1,000 years ago, there were many very devout Muslims back them, but they saw no conflict between their faith and their desire to understand how the world works. It’s that: try and get back that spirit or sense of inquiry, of curiosity about our universe, that is missing now.

MARK COLVIN: Are you worried, then, about the seeming rise of, for instance, denial of evolution around the Islamic world?

JIM AL-KHALILI: Yes; I don’t know whether it’s a rise or whether it’s always been there. I think a discussion and open debate about evolution versus creationism that took place in the West, in Europe, back in the 19th century, has yet to take place in the Islamic world.

People are still nervous about talking about evolution, even in Muslim countries that are actually relatively progressive, like Turkey. It’s still… you have to be careful talking about evolutionary theory, and until that hurdle is overcome, if you need to be worried about how you address such issues because it might conflict with people’s faith, then I think progress is not going to be made.

MARK COLVIN: Jim al-Khalili, author of Pathfinders: the Golden Age of Arabic Science. He was here for the Sydney Writer’s festival.


← Medical Education in Islamic Civilization
Use astronomy to determine start of Ramadan: scholars →