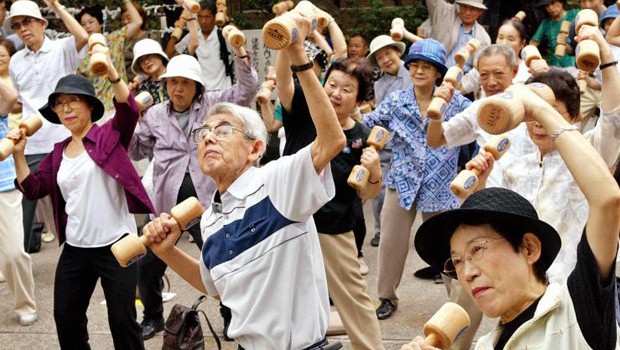 How living to 100 is changing the world

I visited Japan for the first time a few weeks ago. Many things struck me there, most of them very positively. But one clear difference I quickly noticed was the generally older population — so many people in their later years.

I knew, of course, that Japan has, relatively speaking, an ageing population. It has the highest life expectancy in the world: On average now, the Japanese live to be 82.7 years; half the population is over 45; a quarter of it is over 65; and five million people (4 per cent) are over 80. I saw that on the streets, along with many lively youngsters.

In a previous Gulf News column, I wrote about the booming industry of robots, and I mentioned that Japan is a thriving market for personal robotic ‘assistants’ for the elderly. And by one of those coincidences, when I returned from my trip I read that sales of adult diapers in Japan have for the first time now surpassed sales of baby diapers.

In fact, an ageing population is a worldwide phenomenon. It is most striking in Japan, but life expectancy and the population curve have shifted significantly in every single country in the world over the past 50 years. In China, people lived less than 40 years (on average) in 1960; they now live to 76. In Saudi Arabia and Oman, the average life expectancy 50 years ago was 30; it is now around 75. In Qatar, men now live to 84, on average (and women slightly less). There are 30 countries where the average life expectancy is over 80 now, and that number will double over the next few decades!

The most stunning fact I’ve read while researching this topic is that one-third of babies who are born today will live to be 100 or more! By 2050, there will be 400 million people older than 80 and 2 billion older than 60 in the world.

This ageing phenomenon presents governments and societies with some serious challenges — and some opportunities, if addressed properly.

First, it should be clear that this trend is a testimony to humanity’s progress in reducing wars, in defeating killer diseases, and in controlling birth numbers, all of which come from raising education levels among people in general and women in particular. This is also a great consequence of scientific progress.

Secondly, in addressing this ageing phenomenon, one must distinguish between ‘chronological age’ and ‘functional age’: We all know that a 50-year-old person today lives and functions very differently compared to a person of that age from previous generations. As the saying goes nowadays, ‘60 is the new 40’. One must distinguish between ‘biological ageing’ (a body’s physical state as it ages) and ‘social ageing’, which reflects social norms of expectations from the elderly. This distinction will be the key to addressing this important issue for our future.

Ageing has important consequences for society. On the positive side, the elderly commit far fewer crimes and are generally more responsible citizens, voting more regularly, etc. Older people, however, are also much more conservative, socially and politically, are slow to adopt new social and technological trends, and rarely take part in sports and educational programmes.

On the negative side, the elderly have greater medical needs, with new ailments developing with age, including impairment of vision and motor capability, and the appearance of tumours and diseases, including diabetes, heart disease, stroke, senility, Alzheimer’s and dementia. The elderly absorb a chunk of the government’s social welfare budget, receiving pensions and retirement benefits, requiring adult day-care facilities, home-care programmes and retirement homes.

And one of the most important ways by which we make the elderly a burden on governments is in marginalising them and pushing them out of the economy and the general social activity. That is doubly wrong, for not only do we shift them from the ‘plus’ to the ‘minus’ column of economic production and expenses, we deprive society of talents and capabilities that took decades to build. Why should a person retire at 60 or 65, or even much earlier in some countries (including in our region), when they are still strong and active and can contribute much in their fields?

The Arab-Muslim culture, and many societies that have traditionally not been too concerned with the financial ‘bottom line’, have always held the elderly in high regard, although that has often been truer for men than for women. Typically, an old man is treated as a wise man, but an old woman is often (unconsciously) parked in a corner of the house and treated as senile. We must now start changing our perceptions and attitudes: Even at 80, people now are not ‘old’ (as in ‘unable’); they often can, or at least should be encouraged to, remain active and be fully functional.

Integrating the elderly into today’s social and economic fabric is the key to digesting this important ageing trend. We must inject that into our educational and media programmes, imparting the idea of fully participating older people, if we don’t want that big chunk of the population to become a burden.

Nidhal Guessoum is associate dean at the American University of Sharjah. You can follow him on Twitter at:www.twitter.com/@NidhalGuessoum.