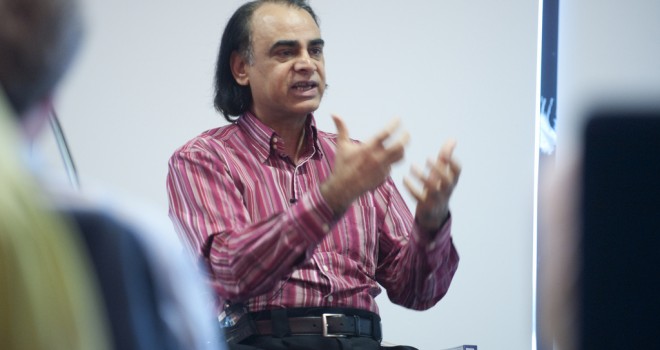 All that we don’t know

According to many senior statesmen of science, we are fast approaching the end of the line for scientific discoveries. Stephen Hawking has announced that we are ready to peep into “the mind of God”. The Nobel prize-winning physicist Leon Lederman tells us that we are very close to discovering the ultimate elementary particle – “the God particle” – which orchestrates the cosmic symphony. This discovery will reduce the laws of physics to a single equation that could be printed on a T-shirt. Soon the human genome will be number crunched, and from conception to death the biochemistry of everything we are will be stored in the computer. We are thus very near to a grand synthesis, a Theory of Everything, which will leave little for unborn generations to discover. All that will remain for science to do is to assemble more and more data, fine tune what we already know, and continue in conveyor-belt advance.

This triumphalist picture reveals more of our ignorance than what we have learnt. If we have reached a definitive moment in science, it is this: the last piece of discovery is, to borrow from T S Eliot, the first. The very thing that awaits us is the enlightened discovery of numerous other ways of knowing. Despite all we know, we know so little about ways of knowing, about the diversity of knowledge that has been and is.

Where do we turn to discover new ways of knowing? We turn to what science has denigrated, dismissed, otherwise suppressed or simply failed to learn. The future of discovery lies in non-western systems of knowledge – systems that present a different topography of thought.

Consider, for example, non-western systems of logic. Modern science operates on the basis of either/or logic (X is either A or non-A). All that has been discovered by science is a product of this Aristotelian logic. But imagine the new possibilities if we moved to a higher fourfold logic. Both Hinduism and Buddhism offer us such a system. The Buddhist Chatuskoti logic, for example, offers an exhaustive set of alternatives, expressed in such statements as: the world is finite; the world is infinite; the world is both finite and infinite; the world is neither finite nor infinite. Perhaps such fourfold systems of logic could be addressed to problems that Aristotelian logic leaves unanswered, such as how can a photon going through a single slit be both a particle and a wave, or how can an electron be at rest and in motion at the same time?

The Jains have an even more sophisticated system of logic. Called the Sapta-bhangi, it consists of a rigorous system for expressing the following options: a thing may be; a thing may not be; a thing may or may not be; a thing may be inexpressible or indescribable; maybe it is not and is inexpressible; maybe it is, is not, and is inexpressible. Once again, we have a highly developed system that opens up a whole new world of knowing. In Quantum computing, where the substratum of yes/no logic breaks down, Jain logic provides an increased range of possibilities. Indeed, in Bangalore and Hyderabad, Indian scientists are already working on developing algorithms based on Hindu and Jain systems.

If we have reached the limits of the metaphysical assumptions underpinning modern science, then the Jain system teaches us that new discoveries can only emerge from pluralistic, multi-layered assumptions of logic and time, nature and universe. Only from elsewhere, in the still unknown of the non-west, is it possible to find how knowledge itself can take on different shapes and emphases.