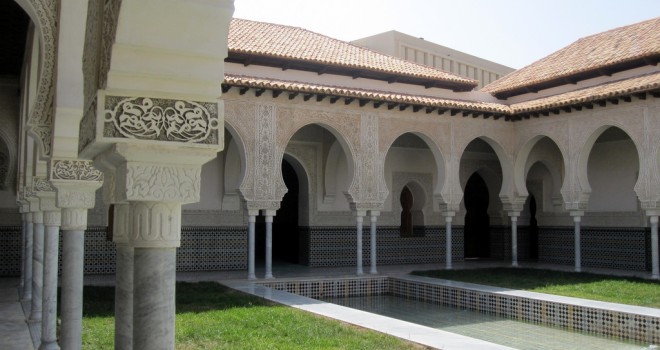 Presentation of my academic work In my work I am focusing now, on the events that brought together Noah and his people in the Qur’an, in relation to “Al-Taqāwul” between them. The origin of “Al-Taqāwul” [1] is the Arabic linguistic root (QWL) which refers to movement. The first root meaning of (Q W L) is: speaking «which refers to the speed and movement. That is to say, that the mouth and the tongue are implementing a rapid movement in the use of speaking » according to Ibn Jinni. From that point of view, we can notice the dynamic aspect within the act “to speak”. Also according to Sibawayh, the meaning of the speech does not apply to the word itself but the whole statement. We refer here to the theme (as a topic of verbal exchange) and the rheme (as comments on the theme). The rheme must be related to the theme and follows and complements it. The exchange of the subject’s words (the theme) requires the appearance of the rheme, which responds to the statements posed (That serves to specify how and why elaborate the theme). For instance we see in the verbal exchange between Noah and his people a common theme (Allah) but different rhemes between two parties (Monotheism vs Polytheism). Furthermore, in our corpus of texts related to Noah in the Qur’an we isolate the passages that refer to the act of Inter-Speaking. Therefore, the concept of “Al-Taqāwul” appears here (that is the exchange of speaking) when the activity of speaking is carried out by Noah and his people -an exchange between two parties, who are antagonists. The speech of Noah to his people requires from them -an answer- to the demand that they worship Allah alone. The reason why Noah started to use “el-qāwl” (because it is not the current belief for the people of Noah) and he implemented “el-qāwl” more than his people (for counterbalancing the weight of representations of polytheism –as a worldview– for his people). In response, the speech of the people to Noah expresses their resistance to his “qāwl” (since they come back to their Gods and they focused on Noah as human being and on the worst people who “follow” him… instead his call to oneness Allah and to be as “believers” who are “with Noah” as the messenger Noah characterized them). For this purpose the leaders of the people of Noah did not accept Noah as a messenger; which means they refuse his “qāwl” and through several ways of their “qāwl” (verbal rejection, ordered the rest of the people to act effectively against him, to rebuke him…).

The importance & the goal of this research

During the current era we live linguistic paradigm (through some theories: theory of dialog; theory of conversation, theory of communication, etc.). From this perspective, we take in account the important presence of the word “qāwl” in the Qur’an: Quantitatively speaking, the word “qāwl” is one of the most important word in the Qur’an. It appears, nearly, 1635 times through its various morphological formulas. Also qualitatively speaking, the word cited is important cross various interaction showed by the Qur’an (both in Present Life & Last Day: between prophets & their people; between believers & unbelievers; between Allah & prophets, between Allah & people, etc.). From this point we focused, essentially on the verbal exchange between prophets and their people. That we are pointing out on the main tool which shows to us the intend of Allah, through his messengers, to convince people for moving them from Polytheism to Monotheism when the latter did not worship Allah alone.

From the point cited and as an instance we see, across the story of Noah & his people, that the prophet Noah use only enunciation for arguing on worshiping Allah alone. Therefore “uttering” is at stake when the messenger Noah became in front of his people for reminding them: worshiping ALLAH alone. We see the same thing in other Qur’anic stories on prophets who tried to convince their people for the same Noah’s purpose: worshiping Allah alone (with few differences: e.g. Moses added staff to his enunciation, etc.).

In conclusion, through “taqāwul” we can improve a serious awakening on how Qur’anic characters (messengers & their people) in stories, used “el-qāwl” toward each other. And what this “taqāwul” shows to us in terms of mind representations (psychological, cultural, social, etc. meanings and goals) from the viewpoint of each character in present time, means through their direct speech.

[1] As a translation of this concept, I chose INTER-SPEAKING: I translate it from French language where I found an interesting meaning: In French INTERPARLER: “interparler quelque chose à quelqu’un “Objecter quelque chose à quelqu’un” (See : DMF : Dictionnaire du Moyen Français, version 2010. ATILF – CNRS & Université de Lorraine. Site internet : http://www.atilf.fr/dmf). In English this becomes: Interspeak something to someone “To object something to someone”. This is the main purpose when Noah started to speak to his people. Having said that, I transformed the word a little because I put INTER-SPEAKING; firstly it’s an activity, where we find two common points (partial common belief and common language) but the source and the purpose of speaking, among interlocutors, are different. In this context I put a hyphen between INTER and SPEAKING: because INTER means between and/or among people: here we are in front of a mutual influence (Noah & his people, etc.). SPEAKING means this interaction is through language. Finally the symbol (-) hyphen means there is a difference between what is common and the speech act, because we are in front of a gap. It is from there that we understand the meaning of the implementation of speech among interlocutors: speech quoted goes beyond what is common (it focuses mainly on the issue of difference and ends by this same issue).