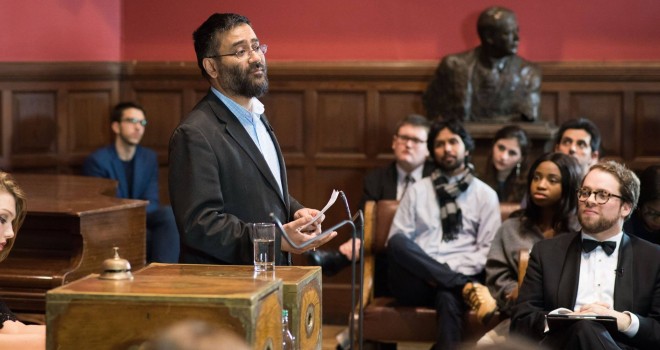 A Muslim response to Stephen Hawking’s pronouncements about God

With the Name of God, All-Merciful, Most Merciful

WHAT BREATHES FIRE INTO THE EQUATIONS?

A MUSLIM RESPONSE TO STEPHEN HAWKING’S LATEST PRONOUNCEMENTS ABOUT GOD

The Introduction to the original 1988 edition of Prof. Stephen Hawking’s A Brief History of Time (Bantam Press) was written by the late Carl Sagan, a leading American physicist who was also atheist. In this Introduction, Sagan put a decidedly atheist slant on Hawking’s work:

“In this book are lucid revelations on the frontiers of physics, astronomy, cosmology, and courage … This is also a book about God … or perhaps the absence of God. The word God fills these pages. Hawking embarks on a quest to answer Einstein’s famous question about whether God had any choice in creating the universe. Hawking is attempting, as he explicitly states, to understand the mind of God. And this makes all the more unexpected the conclusion of the effort, at least so far: a universe with no edge in space, no beginning or end in time, and nothing for a Creator to do.”

Since many, if not most, people who bought the bestseller failed to make much headway into a rather difficult read for the non-specialist, Sagan’s resounding words at the beginning of the book had enormous influence, no doubt. Many people would have been left unaware that Hawking’s short, concluding chapter maintained an agnostic position, rather open to the idea of God. Just over two decades later, the publication of extracts from Hawking’s latest book, The Grand Design, shows that the “greatest physicist since Einstein” has not followed the latter’s mystical view of God, but rather opted for a Sagan-like position.

Over the past week, many journalists and commentators have dug up Hawking’s concluding paragraph from 1988 (p. 175), and reasoned that he has now simply changed his mind:

“However, if we do discover a complete theory … it would be the ultimate triumph of human reason – for then we would know the mind of God.”

However, Hawking had made the more important, philosophical points a couple of paragraphs earlier (p. 174), points that have largely been ignored in the recent debate:

“Even if there is only one possible unified theory, it is just a set of rules and equations. What is it that breathes fire into the equations and makes a universe for them to describe? The usual approach of science of constructing a mathematical model cannot answer the questions of why there should be a universe for the model to describe. Why does the universe go to all the bother of existing? Is the unified theory so compelling that it brings about its own existence?”

It would now appear that Hawking has forgotten these crucial questions by claiming in his latest book (as reported in The Times, 2nd September 2010) that,

“Because there is a law such as gravity, the Universe can and will create itself from nothing. Spontaneous creation is the reason there is something rather than nothing, why the Universe exists, why we exist. It is not necessary to invoke God to light the blue touch paper and set the Universe going.”

Here, Hawking fails to explain where the law of gravity comes from, and fails to answer his own question from 1988,

“What is it that breathes fire into the equations and makes a universe for them to describe?”

Or, as Professor Paul Davies puts it,

“A much tougher problem now looms, however. What is the source of those ingenious laws that enable a universe to pop into being from nothing?”

Hawking’s “spontaneous creation” is God-by-another-name: our atheist friends, like theists, have many names for God!

Hawking’s reliance on M-theory (related to string theory) is objectionable because it goes against his own strong positivist position that demands experimental tests for any theory. Paul Davies says, “It is not testable, not even in any foreseeable future,” and Professor Jon Butterworth adds, “M-theory is highly speculative and certainly not in the zone of science that we’ve got any evidence for.” (Both quotations are from The Times)

Furthermore, the physicists Lee Smolin and Peter Woit have both written popular books about the problems of string theory (The Trouble With Physics and Not Even Wrong: The Failure of String Theory, respectively).

As to the idea of the multiverse, the cosmos as a vast (possibly infinite) collection of universes inferred by Hawking from M-theory, Neil Manson once said that, “the multiverse is the last resort of the desperate atheist.” However, whereas some of our Jewish, Christian and Muslim friends may have objections to the multiverse, given the centrality of the Israelite people, Christ and Muhammad respectively in our theologies, others have no such problems. The Qur’an teaches that God created “seven earths” (Surah al-Talaq or Chapter: Divorce, 65:12). The great early commentator, Ibn ‘Abbas, taught that “on each earth there is an Adam, a Moses, a Jesus and a Muhammad.” In other words, there is life on other planets and possibly in parallel universes, and since all creation is there to glorify God, other forms of intelligent life may also reach the heights of spirituality amongst their species.

God as Creator (al-Khaliq, and also the intensive form al-Khallaq) is able to create as many universes as He wishes. So in answer to the question, “God or multiverse?” it is obviously possible to believe in God as Lord of the Multiverse (Rabb al-‘alamin).

In conclusion, it should be remembered that Hawking is a brilliant scientist.  Science does an excellent job of describing Nature, or as a theist would say, how God creates.  But science can say nothing essential about why we are here and how we should live our lives: only true and balanced faith and religion can answer those questions, with Messengers of God to show us the Way.

Dr. Usama Hasan is Senior Lecturer in Engineering at Middlesex University, an imam at Al-Tawhid Mosque in London and a Fellow of the Royal Astronomical Society.