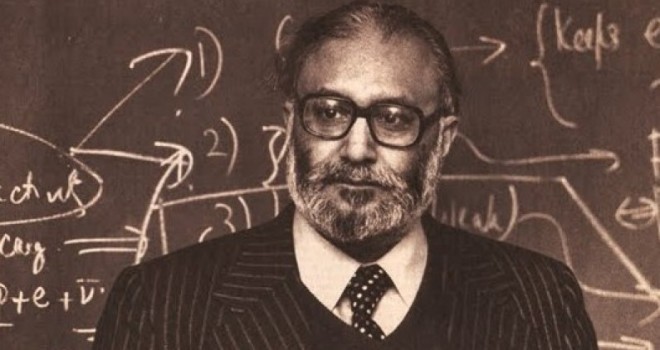 Muhammad Abdus Salam was a genius. And for a genius to end up receiving the Nobel Prize is a no big surprise. But in this case, the feat was extraordinary. Indeed, Abdus Salam was the first Muslim to ever receive that most prestigious award, especially in the sciences [1]. Born in 1926, he came from a small village of the Punjab region of what was then India and today Pakistan. In fact he received most of his education in that poor part of the world; yet he showed his genius from very early on, as when he obtained the highest marks ever recorded for the matriculation examination at the University of the Punjab at the record age of 14. He then earned a Master’s degree from that university and a scholarship to Cambridge University, where he received the Smith’s Prize for the most outstanding pre-doctoral contribution to physics, and went on to obtain his PhD in theoretical physics. By the time his thesis (in quantum electrodynamics) was published (in 1951), it had already gained him an international reputation. He was then only 25 and was only beginning.

After a few years back in Pakistan, he realised that he would not be able to continue the kind of research he had the capacity for, and so he returned to Cambridge. But he continued to contribute to his country’s scientific and technological development, at least in terms of policy; he thus participated in starting Pakistan’s nuclear technology program as well as its space and atmosphere agency Suparco.

His major contributions to science, to the Third World and to humanity in general came in the sixties. It was then that he – independently from two Americans (Sheldon Glashow and Steven Weinberg) who would in 1979 share the Nobel Prize with him for the same achievement – developed the electroweak theory of particle physics, a mathematical and conceptual synthesis of the electromagnetic and weak interactions (or forces), a major step in the physicists’ long quest to unify the four fundamental forces of nature (gravity, electromagnetism, the weak nuclear force and the strong

In addition to his seminal and long-lasting contributions to physics, Salam was driven by two other major preoccupations: (1) the need to help scientists in the Third World achieve their potentials and contribute fully to humanity; and (2) the need to harmonise faith in God with the methods of modern science. He thus spent the second half of his life devoting most of his time and energy to creating the conditions for helping Third World scientists. So first, in 1964, he founded the International Centre for Theoretical Physics [2] (renamed after him upon his death in 1996) in Trieste in Northeastern Italy. Salam also founded the Third World Academy of Sciences (TWAS) in 1983 (also in Trieste), which aims at facilitating contact and cooperation for excellent research between Third World scientists and organizations.

He used his share of the Nobel Prize entirely for the benefit of physicists from developing countries and did not spend a penny of it on himself or his family; likewise for the money he received from the Atoms for Peace Award.

Additionally, Salam was always deeply imbued with his Muslim faith. Salam belonged to the Ahmadiyya Muslim community; some have claimed that because of this, i.e. belonging to a non-orthodox branch of Islam, the Pakistani government never gave him the regard he should have received for all his extraordinary contributions. One of his deeply held beliefs was that there was no contradiction whatsoever between his faith (and faiths of believers in the Divine in general) and the discoveries that science allows us to make about nature and the universe. In his Nobel Prize banquet address,

Salam quoted the following verses from the Qur’an: ‘Who hath created seven heavens in harmony. Thou seest not, in the creation of the All-Merciful any imperfection, Return thy gaze, seest thou any fissure? Then Return thy gaze, again and again, it will come back to thee dazzled, aweary’ (Q 67:3–4). He then added, ‘This in effect is the faith of all

physicists: the deeper we seek, the more is our wonder excited, the more is the dazzlement for our gaze’ [3]. He also often stressed that the Qur’an encourages us, sometimes even commands us, to reflect on the order of nature, and that is what science now is capable of doing, in a way never before possible; our generation, he has remarked, has been privileged with the gift of discovering the intricacies of God’s design in the universe.

Salam, however, has not written extensively on the philosophical issues surrounding the attempts to harmonise faith with modern science. One of the few texts he has written to describe his vision of science, religion and humanity today has been repoduced as a chapter in the Selected Essays of Abdus Salam, volume published in 1987 under the title Ideals and Realities [4].

I had the honour and pleasure of meeting Abdus Salam and spending a few days with him in 1991 when he was invited by the president of the University of Blida (Algeria), where I was then a young professor. The university president, Nouredine Zettili, an Algerian theoretical physicist who was closely familiar with Salam’s work, invited the illustrious scientist to visit our university and give a series of talks. Salam accepted, and I was asked to act as the translator. Salam addressed the scientific council at the university, met with the minister of higher education and other high officials, and gave two long talks at the university, one on the standard model of particle physics (including, of course, his central contributions) and the other on science and the Muslim world. The second talk, as it turned out, was essentially the content of the chapter from Ideals and Realities I have mentioned above. The audience was mesmerised by this humble man, who easily manipulates Einstein’s equations, quotes from the Qur’an, cites Newton, Maxwell and Faraday, pauses when the call for prayer is heard in the middle of the seminar, resumes to relate a story from al-Biruni’s life and so on. No one had ever seen a man at the highest levels of the scientific establishment in so perfect a harmony between his rigorous methods and knowledge, his faith and his cultural identity and history.

[1] Only one other Muslim has been awarded the Nobel Prize in the sciences: Ahmed Zewail in Chemistry in 1999. Other Muslims who have received the Prize are Naguib Mahfouz in 1989 (Literature); and Anwar Sadat in 1978, Shirin Ebadi in 2003, Mohamed El-Baradei in 2005, and Muhammad Yunus in 2006 (Peace).

[2] To give an idea about the scale of achievement of ICTP, one may simply note the following statistics (from the ICTP website): since 1964 the Centre has received about 100,000 visits from scientists worldwide; in just 2005, it received some 6,000 visitors from 122 countries.


← Women power in education
Why couldn’t Nasa find that plane? →