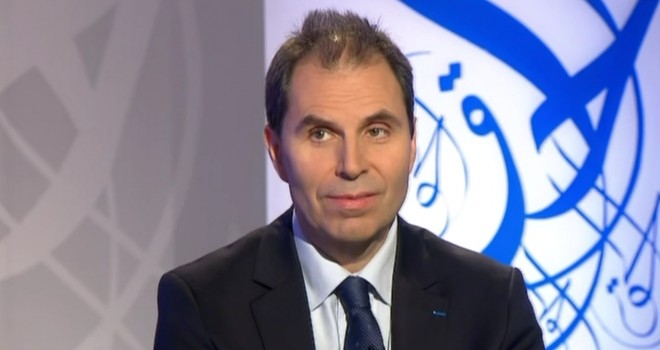 Where science and religion meet, from an Islamic perspective

here and how science and religion intersect is a debate that dates back centuries; it’s also a regular part of contemporary discourse.

The discussion took center stage at the 2007-08 Paul Tillich Lecture on Monday (May 5) in the Science Center’s lecture hall B, where a noted astrophysicist and religious scholar explored the deeper dimensions of science’s relationship to Islam.

The annual lecture is named in honor of Paul Tillich, the great German-born theologian and philosopher and University Professor at Harvard University from 1954 to 1962.

Bruno Guiderdoni, who is uniquely qualified to speak on the topic, titled his lecture “Science, Faith and the Dialogue of Cultures: Islamic Perspectives.” The French native is widely recognized as an expert on galaxy formation and evolution as well as a prominent interpreter of Islam. He has written numerous papers on both topics and is the director of research at France’s National Center for Scientific Research and co-founder and director of the Islamic Institute for Advanced Studies in Paris.

He addressed the intersection of Islam and science and countered recent claims that Islam’s inability to make a solid connection to reason is responsible for its lack of participation in the scientific world.

In examining some of Islam’s essential principles, Guiderdoni asserted the “spiritual tenets and intellectual resources of the Islamic faith actually prompt Muslims to search for knowledge.”

The Quran, he said, provides many examples of Islam’s strong ties to knowledge.

The holy text provides Muslims “with a way to celebrate God’s mystery as well as to approach his intelligibility,” said Guiderdoni. “This intelligibility requires the use of reason encapsulated in a broader perspective of knowledge.”

“A famous Quranic verse,” said the scientist, “prescribes ‘worship your lord till certainty,’ and many prophetic sayings strongly recommend the pursuit of knowledge as a religious duty ‘incumbent to all Muslims.’”

Famous Islamic scholars throughout the years, said Guiderdoni, noted that “reason is God’s gift to the human being, and God warrants its efficacy.”

A strong Islamic ethic can also inform the science of the present day, said Guiderdoni. He offered the example of man, created, according to Islamic doctrine, to be the “garden keeper in the garden” — to look after the other garden inhabitants.

“This symbol of the garden keeper in the garden has a strong echo today, with the current debates on how to deal with global warming, the share of natural resources in a sustainable way, or the preservation of biodiversity,” said Guiderdoni. “The power that science has given us must be accompanied by a greater sense of the ethic that is necessary to use this power with discrimination and intelligence.”

Respondent David Lamberth appreciated Guiderdoni’s presentation of the Islamic perspective on man as entrusted with the well-being of the planet. The notion, he said, challenged the dominant Christian theology described in Genesis, that humans are granted dominion over all creatures in the sea and on the earth.

“Humans,” he said, “are not above animals or plants or all of creation on [Guiderdoni’s] reading, but rather have a particular and important role to play, which places us at the center in relation to God’s plans for creation.”

Moreover, noted Lamberth, associate professor of theology at Harvard Divinity School, the metaphor implies a responsibility that has important implications in regards to the scientific challenges of the present day.

“This whole line of theological reflection, as Dr. Guiderdoni notes, is particularly salient and promising with regard to environmental issues that are so crucial in our contemporary world.”

Religion and science can learn from each other, asserted respondent Howard Smith, senior astrophysicist at the Harvard-Smithsonian Center for Astrophysics.

Smith, author of “Let There Be Light: Modern Cosmology and Kabbalah: A New Conversation Between Science and Religion” (New World Library, 2006), said that astronomers who once had a reasonably firm grasp on their understanding of the cosmos are no longer quite so sure.

“We discovered dark matter and dark energy,” he said. “Our discomfort has grown because we still have no idea what they really are. I think we scientists are being admirably honest in admitting that we do not know as much as we thought, and this lesson of humility is one that science can offer to theologians.”

Smith offered the phrase “open up to me,” saying it has a profound implication for each discipline.

“This is the call of modern science to spiritual seekers, open yourself up to the wonders of the universe as revealed by science and to the insights that relay that sense of awe,” he said. “This is also the call of religion to the scientists … open up to the possibilities of wonder, love, and to the ethical responsibility of living in a quantum multiverse that, behold, is very good.”