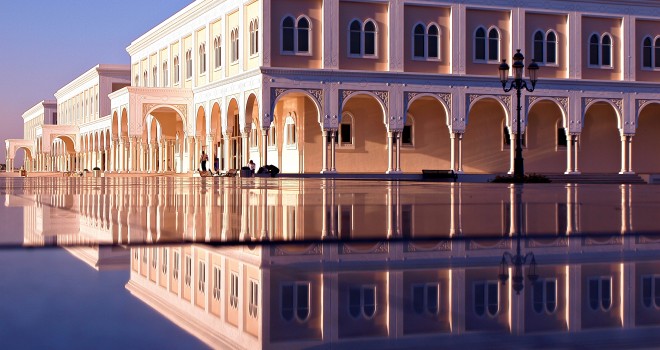 A professor of physics and astronomy at the American University of Sharjah, Nidhal Guessoum writes in the latest issue of Nature, that the utilitarian approach to science in Arab countries has had a devastating effect on the field of astronomy.

Today, Arab astronomy barely registers on the world map. Scientific research is weak across the Arab world, and astronomy weaker still. Unlike countries of comparable gross domestic product per capita, such as Turkey, Israel and South Africa, most Arab nations are generating fewer than ten papers in the field each year, and these are hardly cited. Few sizeable telescopes are operational or planned.

This is in spite of the fact that the Gulf states boast numerous super locations for observatories.

The region has several excellent observing locations above 2,000 metres that benefit from clear skies. Public fascination is strong, as shown by the many local amateur associations and large gatherings for astronomical events, such as eclipses, comet passages or the most recent transit of Venus across the Sun in June 2012.

Cultural principles, such as serving the people first, led most Arab nations in the middle of the last century to build bases in the applied sciences — for example in petrochemical engineering to support the oil industry in the Gulf States.

Countries of the region also wanted to develop their infrastructure quickly after the departure of colonial powers–and this deprived the more theoretical sciences of support.

“Today,”  writes Guessoum, “subjects such as theoretical physics are taught widely but are low cost and are considered low priority. Astronomy seems to require expensive buildings, equipment and technicians for little tangible return.”

It should come as no surprise that biology suffers in the same way, and I’ve had conversations with Muslim biologists about the problems this causes for the future of medical innovation in Arab states.

I asked Guessoum if he were able to get the funding, where he would build a state-of-the-art facility if he had the funding.

“If I had $100 million and I was given the full choice,” he wrote me in an email, “first I would assemble a committee of experts (Arabs and non-Arabs) to discuss the question, then perform ‘seeing’ tests on a select number of sites, then put the observatory in the best location.

“However, I understand that your question means ‘where do I personally think the best site is, considering what I know…’ and my answer is either Oman or Lebanon.”

Oman has high mountains, clear skies, and probably less bureaucracy than many Arab countries, he added, and so there would be some ease in building a state-of-the-art facility there.

Lebanon has several very good universities, good mountain locations. “It’s well located within the region (also close to Europe), and hopefully (in the future) will have enough stability to allow for a great international project to flourish.”

And to what particular research would he dedicate such an observatory?

“The topic that I find fascinating is exoplanets,” said Guessoum. “And such a facility would not only contribute to the world’s research but help raise the human and theological issues that are behind it.”

An added benefit: such observatories would galvanize the teaching of astronomy in the region. “Something that is also close to my heart,” he said.

Islamic countries historically have shown a deep commitment to the study of astronomy and mathematics, and Guessoum’s article touches on some key examples. [A superb book on the topic is Ahmad Dallal’s Islam, Science and the Challenge of History.]

But it’s high time, he says, to write some new pages in the history of Arab astronomy, and that can only be done with the direct support of Arab governments.


← Entertainment can also be thought-provoking
Islam and Science Yesterday →