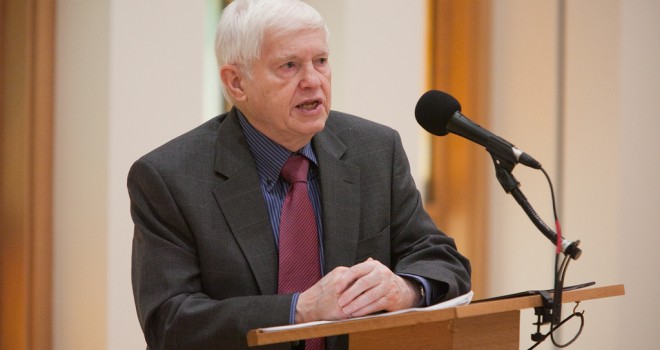 Science And Religion: Where The Magisteria Overlap

Science is far more entangled with a humanistic or theological vision than we might expect, writes Harvard University’s Owen Gingerich in his new book, God’s Planet.

Gingerich is Professor of Astronomy and the History of Science, Emeritus, at the Harvard-Smithsonian Center for Astrophysics, and the author of The Book Nobody Read and God’s Universe, among many other notable books in a long and distinguished career.

Based on three lectures that he delivered last year at Gordon College in Massachusetts (The Herrmann Lectures on Faith and Science), God’s Planet explores three cases in the history of science where faith and science dramatically overlapped.

That science and religion should not overlap was the famous suggestion of the late Stephen Jay Gould, who adopted the idea of Non-Overlapping Magisteria (NOMA) in his book Rock of Ages. Despite Gould’s good intentions, the idea has never been appealing to either side, as Gingerich notes.

It was within the milieu of evolution that Stephen Jay Gould framed his concept of non-overlapping magisteria, the idea of two cultures, each minding its own business and going its own way by its own rules. And to a large extent this makes sense. Science and religion are two major cultural identities in the world today, and they use evidence far differently although their goal of a coherent understanding is remarkably similar. It is best if each can respect the other and cooperate rather than compete. But it is a fallacy that there is no overlap of magisteria. In particular, the fascinating question of how and when we became human inevitably offers an overlap and potentially competing world views. [p. 98]

Gingerich delves into the lives and work of Nicolaus Copernicus, Charles Darwin, and the late Fred Hoyle, respectively, to reveal how the work of each scientist prompted questions with huge implications for humanity.

For obvious reasons Copernicus was cautious about how his great work, De revolutionibus orbium coelestium, On the Revolutions of the Heavenly Spheres, would be received by colleagues and Church officials accustomed to believing the Earth was at the center of the universe.

But the really interesting aspect of this chapter in the history of science, Gingerich writes, is why a sun-centered system was gradually accepted by Europeans centuries before the clinching scientific evidence was confirmed in the nineteenth century.

Throughout the seventeenth century, according to Gingerich, “the public acceptance of the Copernican cosmology was slow, far from unanimous, and based not on proofs but on the persuasion of what was increasingly seen as a coherent system.”

A very important element in its acceptance was Galileo’s Dialogue on the Two Chief World Systems, published in 1632. Although he had no solid proofs of the motion of the Earth, Galileo argued persuasively, making it intellectually respectable to believe in the Copernican system. I like to say that it was the book that won the war. [p. 47]

Fifty-five years later, Isaac Newton’s great work, Philosophiae naturalis principia mathematica, The Mathematical Principles of Natural Philosophy, further reinforced the coherence of the Copernican system, with laws of mechanics and gravity that reinforced the model. That was enough for most of the scientific establishment.

Not for the religious establishment.

Indeed, the Catholic Church’s Inquisition did not finally remove Copernicus’s book from the Index of Prohibited Books until 1838, the year that stellar parallax was convincingly established.

Gingerich’s second lecture delves into Darwin and evolution. And although this is much more well-trodden ground, the reader is rewarded with fascinating selections from the letters of Darwin’s contemporaries. In particular, those of the religious supporters of evolution, and how they accommodated what Darwin worried were the most disturbing ramifications of natural selection.

But the last lecture, which treats of recent history, is for me undoubtedly the most fascinating chapter in the book. It recounts the life and work of the late Fred Hoyle, whom Gingerich knew personally. A brilliant scientist, Hoyle was well known for his acerbic wit and his public atheism.

Yet, as Gingerich relates, it was one of Hoyle’s most significant scientific achievements that caused him to question his own skepticism.

Within a few years Hoyle and Fowler, together with Geoffrey and Margaret Burbidge, worked out in considerable detail how the building of the heavier elements could take place in the cores of evolving stars, and in 1957 they published one of the most important astrophysics papers of the twentieth century, which goes under their initials in alphabetical order, B²FH. This was a massive paper requiring months of work. In a letter published in Science, Geoff Burbidge remarked that Hoyle alone formed the theory of stellar nucleosynthesis. It is an important example of where Hoyle was right. [p. 124]

It is also where Hoyle was struck by an example of cosmic fine-tuning that he found hard to shrug off.

One of Hoyle’s main predictions in the paper was a very specific resonance state for the carbon-12 atomic nucleus. The prediction was verified by Fowler using his lab’s atomic accelerator.

The resonance state of carbon-12 is what makes possible the substantial abundance of carbon and consequently the possibility of carbon-based life in the universe. As Hoyle later wrote, cited by Gingerich:

Would you not say to yourself, ‘Some super-calculating intellect must have designed the properties of the carbon atom, otherwise the chance of my finding such an atom through the blind forces of nature would be utterly minuscule.’ Of course you would….A common sense interpretation of the facts suggests that a superintellect has monkeyed with physics, as well as with chemistry and biology, and that there are no blind forces worth speaking about in nature. The numbers one calculates from the facts seem to me so overwhelming as to put this conclusion almost beyond question.” [p. 126]

Of course, as many physicists have argued, almost is the key word, and not everyone has been as impressed by the resonance state of the carbon nucleus as Hoyle was.

But as Gingerich points out, even Nobel laureate Steven Weinberg has admitted that anthropic explanations for the fine-tuning of the cosmos can’t be lightly dismissed.

“Such crude anthropic explanations are not what we hoped for, but they may have to content us. Physical science has historically progressed not only by finding precise explanations of natural phenomena, but also by discovering what sorts of things can be precisely explained. These may be fewer than we thought.” [p. 142]

God’s Planet will be available in hardcover on October 22. A quick read, at 164 pages, but a rich volume you’ll want to keep in your library.


← Science and Islam in Conflict
In Egypt, religious texts may be used as science references →