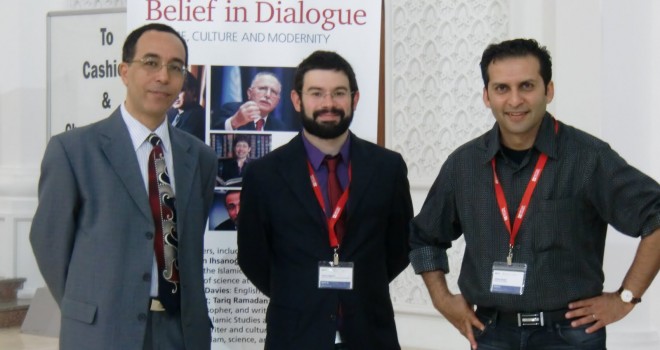 Meeting The Challenge Of Science For Muslims On Campus 2/2 “Secondly: to show that Cosmology does indeed lend itself to philosophical and theological interpretation, by relating the scientific picture that cosmology gives us about the universe to the more general worldview and philosophy of creation and existence.”

“This is something which is slightly controversial,” he added, “as scientists generally tend to resist the idea that science can be connected to philosophy, and even less so to theology.”

Also making a presentation on the panel was Salman Hameed, a professor of integrated science and humanities at Hampshire College in Massachusetts. Hameed also runs the excellent IRTIQA blog, where he discusses events and issues related to science and religion in the Islamic world. (And posts offbeat movie reviews.)

“I find Project Nur interesting as its parent organization (American Islamic Congress) does not define itself as a religious organization,” he said.

“Instead it is focused on the cultural elements within Islam. It is also interesting that that they are not shy about topics that some Muslims may find controversial and one of the stated goals is to create a safe space for diverse voices amongst Muslims in the US. I think this is a worthy goal and I hope they find success.”

The panel was hosted by Ali Hassan, an assistant professor of philosophy at U. Iowa. “This is an excellent sort of event,” he said, “because it encourages interfaith dialogue as well as dialogue between philosophers and scientists, and theologians who can then recognize that despite their differences, they can respectfully disagree and learn from each other about the value of science as well as the richness of religious history.”

This is a huge topic, of course, and one I expect to come back to. In a follow up post, I’ll show some video highlights from this first panel discussion, including reactions from members of the audience.

I also plan to report on the future panels in series: the second is currently slated for the early Autumn.


← Meeting The Challenge Of Science For Muslims On Campus 1/2
Visibility of the thin lunar crescent: the sociology of an astronomical problem (A case study) →