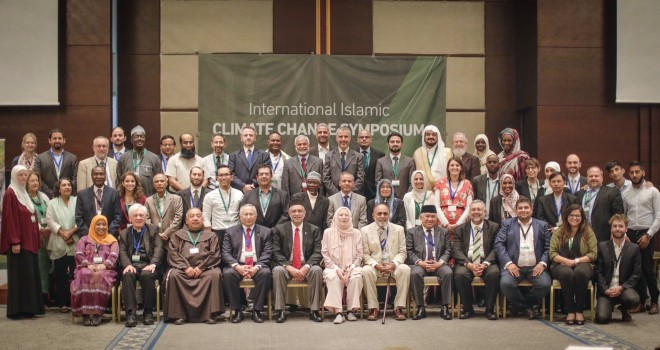 Muslim scholars have called on the world’s 1.6 billion Muslims to take action on climate change. Islamic principles support them

Fewer than four months before politicians gather in Paris to try to hammer out an international climate agreement, Islamic scholars have underscored the urgency of halting climate change.

The International Islamic Climate Change Symposium, drawn up by a group of academics, Muslim scholars and international environment policy experts, was announced this week at a symposium on Islam and climate change in Istanbul. It calls on the 1.6 billion Muslims around the world to phase out greenhouse-gas emissions from fossil fuels and switch instead to energy from renewable sources.

We have a religious duty to take immediate action against climate change!

In the name of Allah, Most Merciful, Most Compassionate

“Human activity is putting such a strain on the natural functions of the earth that the ability of the planet’s ecosystems to sustain future generations can no longer be taken for granted.”

We are driven to conclude from these warnings that there are serious flaws in the way we have used natural resources – the sources of life on Earth. An urgent and radical reappraisal is called for. Humankind cannot afford the slow progress we have seen in all the COP (Conference of Parties – climate change negotiations) processes since the Millennium Ecosystem Assessment was published in 2005, or the present deadlock.

1.8 It is alarming that in spite of all the warnings and predictions, the successor to the Kyoto Protocol which should have been in place by 2012, has been delayed. It is essential that all countries, especially the more developed nations, increase their efforts and adopt the pro-active approach needed to halt and hopefully eventually reverse the damage being wrought.

Praise be to Allah, Lord and Sustainer of all beings

He is the One Creator – He is al-Khāliq

He is Allah – the Creator, the Maker, the Giver of Form

He Who has perfected every thing He has created

Nothing that He creates is without value: each thing is created bi ’l-haqq, in truth and for right.

And We did not create the heavens and earth and that between them in play. We have not created them but in truth

All that is in the heavens and the earth belongs to Allah.

He raised the heaven and established the balance

So that you would not transgress the balance.

Give just weight – do not skimp in the balance.

He laid out the earth for all living creatures.

So set your face firmly towards the (natural) Way

As a pure, natural believer

Allah’s natural pattern on which He made mankind

There is no changing Allah’s creation.

That is the true (natural) Way

But most people do not know it.

2.5 We recognize the corruption (fasād) that humans have caused on the Earth due to our relentless pursuit of economic growth and consumption. Its consequences have been –

Corruption has appeared on land and sea

Because of what people’s own hands have wrought,

So that they may taste something of what they have done;

So that hopefully they will turn back.

There is no animal on the earth, or any bird that wings its flight, but is a community like you.

The creation of the heavens and the earth

Is far greater than the creation of mankind,

But most of mankind do not know it

Then he who has done an atom’s weight of good, shall see it;

and he who has done an atom’s weight of evil, shall see it.

2.8 In view of these considerations we affirm that our responsibility as Muslims is to act according to the example of the Prophet Muhammad (God’s peace and blessings be upon him) who –

3.1 We call upon the Conference of the Parties (COP) to the United Nations Framework Convention on Climate Change (UNFCCC) and the Meeting of the Parties (MOP) to the Kyoto Protocol taking place in Paris this December, 2015 to bring their discussions to an equitable and binding conclusion, bearing in mind –

3.2 We particularly call on the well-off nations and oil-producing states to –

3.3 We call on the people of all nations and their leaders to –

3.4 We call upon corporations, finance, and the business sector to –

3.5 We call on all groups to join us in collaboration, co-operation and friendly competition in this endeavour and we welcome the significant contributions taken by other faiths, as we can all be winners in this race

He (God) wanted to test you regarding what has

come to you. So compete with each other

If we each offer the best of our respective traditions, we may yet see a way through our difficulties.

3.6 Finally, we call on all Muslims wherever they may be –

Do not strut arrogantly on the earth.

You will never split the earth apart

nor will you ever rival the mountains’ stature.

We bear in mind the words of our Prophet (peace and blessings be upon him):

The world is sweet and verdant, and verily Allah has made you stewards in it, and He sees how you acquit yourselves