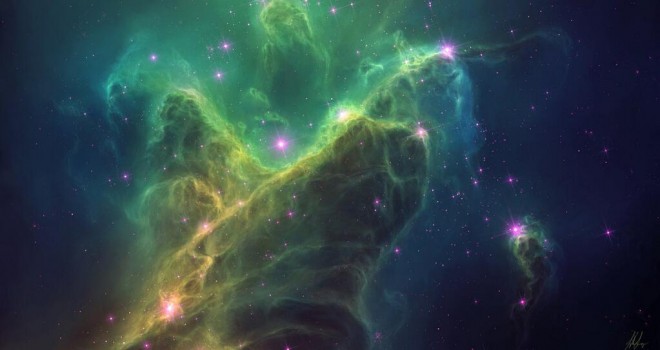 Islam and Science: Faith as a matrix for purpose 4/5

Let me now propose a view on how the articulation between modern science and religion can be addressed in the Islamic tradition. I would like to suggest that the theological and metaphysical corpus of the Islamic thought is rich enough to help the Muslim scientist find a meaning in the world as it is described by the current scientific inquiry. Of course, I am not going to propose a new form of parallelism. I will rather speak in terms of convergence. Reality uncovered by modern science can fit in a broader metaphysical stage. I will only give four examples on how this convergence can take place.

(1) The intelligibility of the world

The Koran mentions the regularities that are present in the world: “you will find no change in God’s custom”. Therefore “there is no change in God’s creation.” Clearly this does not mean that Creation is immutable, since in many verses the Koran emphasizes the changes we see in the sky and on earth. These verses mean that there is “stability” in Creation reflecting God’s immutability. Moreover, these regularities that are a consequence of God’s Will can be qualified as “mathematical regularities”. Several verses draw the reader’s attention to the numerical order that is present in the cosmos: “The Sun and the Moon [are ordered] according to an exact computation (husbân).”

How does God act in His Creation? According to the mainstream Islamic theology, God does not act by fixing the laws of physics and the initial conditions and letting the world evolve mechanistically. As a matter of fact, the “secondary causes” simply vanish, because God, as the “primary Cause”, does not cease to create the world again and again. “Each day some task engages Him.” In this continuous renewal of creation (tajdîd al-khalq), the atoms and their accidents are created anew at each time.  This is the reason why “the accident does not remain for two moments.” The regularities that are observed in the world are not due to causal connection, but to a constant conjunction between the phenomena, which is a habit or custom established by God’s Will.

The examination of causality by the Islamic tradition emphasizes the metaphysical mystery of the continuous validity of the laws. “All that dwells upon the earth is evanescent”, and should fall back into nothingness.  But the (relative) permanence of cosmic phenomena is rooted in God’s (absolute) immutability (samadiyyah). This is the reason why “you will not see a flaw in the Merciful’s creation. Turn up your eyes: can you detect a single fissure?”

In any case, the metaphysical criticism of causality by Islam did not hamper the development of the Islamic science at the same epoch. On the contrary, the criticism of the Aristotelian conception of the causes as mere conditions for effects to occur necessarily and immediately opened the way to a deeper examination of the world to determine what the “habit” or “custom” proposed by God actually was. Deductive thinking that goes from causes to effects cannot be used a priori in the realm of nature. One has to observe what is actually happening. The development of science in Islam during the great classical period was closely linked to the will to look at phenomena.

One fundamental element of the Islamic doctrine is the fact the God praises and loves diversity: “Among his signs: the diversity of your languages and of your colors.” As a matter of fact, God never ceases to create, because of His love, or rahma, a word that etymologically alludes to the maternal womb. The mother’s love for her children is the best symbol of this divine love on earth, according to a Prophetic teaching which says that God created one hundred parts of this rahma, and He kept ninety-nine parts of it with Him, while letting one part descend on earth. It is with this part on earth that all mothers care after their children. This divine love reaches the diversity of creatures, physical phenomena, plants and animals, as well as the human diversity of ethnical types, languages and cultures, and extends to the diversity of religions, according to this well-known verse: “And if God had wanted, He could surely have made you all one single community. But He willed otherwise in order to test you by means of what He has given to you. Vie, then, with one another in doing good works. Unto God you all must return; and then He will make you truly understand all that on which you are differing.”

A Muslim scientist can easily appreciate this love of diversity in the meditation on the results of modern science. Thanks to the technical means of exploration, modern cosmology has discovered a spectacular view of the universe of galaxies, one hundred billions galaxies in the observable universe. Each galaxy consists in typically one to one thousand billion stars. And it is very likely that each of these stars is surrounded by several planets, which themselves may have satellites. This makes an incredible number of planets, to which one must connect the fact that differential evolution gives each planet a specific identity that does not resemble to the others. Of course, we do not know how much of these planets actually harbor life forms, but astrophysicists cannot contemplate these large numbers without thinking that life probably exists elsewhere is the universe. Only on earth, there are millions of living species. Can one imagine what the observable universe is? And the patch of the universe where it is expected that the laws of physics (and galaxies, stars and planets) are similar to the ones we know, is probably much larger than the observable universe, by a factor of many billions. And this patch of the universe may be encapsulated in an infinite multiverse in which the laws of physics and the properties of the outcomes greatly vary from patch to patch. What is the meaning of that all? A believer can read the creativity and love of God in this landscape. Love is the explanation of creation, according to the tradition where God says, “I was a hidden treasure. I loved to be known, so I created the creatures to be known by them.”

(4) Science cannot be separated from ethic

According to the Islamic doctrine, the human being is created from clay and from God’s spirit, to become “God’s vice-regent of earth”. The human being is the only creature that is able to know God through all His names and attributes, and it is put on earth as a garden-keeper in the garden. Our relationship with other living creatures on earth is not that from the upper to the lower level, with the concomitant possibility to exploit all “inferior” beings”, but that from the central to the peripheral. The “central” position of the garden-keeper on earth is the position of the watchman who equally cares after all the inhabitants of the garden. This implies a sense of accountability for all creation, and should lead to humility, not to arrogance. As a consequence, we can eat the fruits of the garden, but we have no right to uproot the trees, which do not belong to us. The power that science has given to us must be accompanied by a greater sense of the ethic that is necessary to use this power with discrimination and intelligence. To say the things in a few words, we must not do all what we can do, very much as Adam was not allowed to touch one specific tree in the garden. This prohibition makes us free, because freedom requires the possibility of a choice. This symbol of the garden keeper in the garden has a strong echo today, with the current debates on how to deal with global warming, the share of natural resources in a sustainable way, or the preservation of biodiversity.


← Islam and Science: Islamic perspectives on faith and reason 3/5
Climate assessments: 25 years of the IPCC →