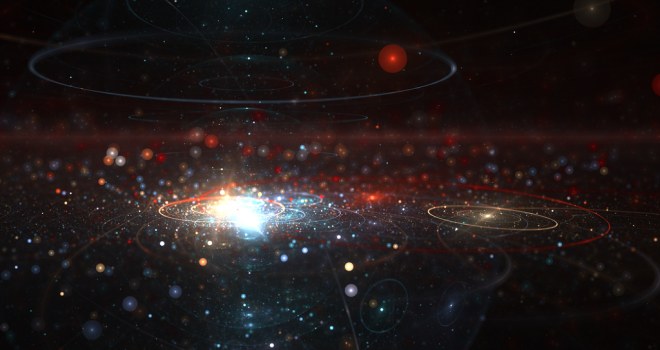 From Puzzles to Metaphysical Issues 2/2

The intelligibility and universality of the laws

Some cosmologists use the word « universe » for each of these causally-disconnected patches, and the word « multiverse » to name the ensemble of all these patches generated by chaotic inflation. Of course, there is some ideology in the choice of the names. According to its symbolical etymology, the universe is a sign that is directed « towards the One » (unum versus). In the mind of some of those who promote the multiverse, new cosmology is more sympathetic with polytheism than with monotheism. Do many worlds suggest many gods ? However, all these patches of the universe are actually linked by the fact that they are ruled by the same principles of quantum physics and the same over-arching field theory. For that reason, there is actually a single universe. Why are the laws of quantum physics so universal ?

Those who want to evacuate finality and explain the coincidences by selection principles and observing biases (the possibility of existence for observers) have also to explain how Man is able to design quantum mechanics and field theory with his finite mind. The usual argument is that Darwinian evolution enhances our ability to detect symmetry because predators/preys are symmetric. This explanation means that, in the patch of the universe that happens to have the correct values for the macroscopic properties, the genes (or gene packages) that rule the appearance of symmetry in evolved forms of life were also selected (by selection pressure) at least on one planet, with the outcome that one of the species on this planet is able to understand enough mathematics to design fundamental explanations about the cosmos. This is clearly another remarkable coincidence that is somewhat neglected by its supporters.

Here again, modern cosmologists do not wonder enough about the continuous validity of the laws. It is well known that the Ash`arite theology strongly questions the very existence of causality. The position is that there are no secondary causes, simply because God, as the « primary » Cause, does not cease to create again the world at each instant. In this continuous renewal of creation (tajdid al-khalq), the atoms and their accidents are created anew at each time.  As a consequence, the regularities observed in the world are not due to causal connection, but to a constant conjunction between the phenomena, which is a custom established by God. This principle of the Islamic theology should be primarily understood as an emphasis on a metaphysical mystery : the continuous validity of the laws. God’s permanence makes creation behave regularly in spite of the continuous renewal : « you will not see a flaw in the Merciful’s creation. Turn up your eyes : can you detect a single fissure ? »

There is even more now. Quantum cosmology attempts to address the issue of the singularity. It requires a still-to-come theory of quantum gravity, and is far from being complete, but several routes have been explored so far. The interesting point here is the philosophical consequences of the works in this field. For instance, the Hartle-Hawking theory evacuates the singularity. According to Hawking’s comment in A Brief History of Time, this theory does not give God any place or choice in a cosmos without beginning. Vilenkin’s theory explains the universe by tunneling effect from quantum vacuum. This theory is sometimes misunderstood as the scientific version of the appearance of « being » from « nothingness » promoted by the existentialist philosopher Heidegger. A random process in quantum physics here replaces non–sense in philosophy. In both cases, the interpretation explicitly attempts to close the route to meaning. However, quantum vacuum is far from nothingness, and is surely part of the universe. Works are in progress to use the last developments of super-symmetric string theory to make pre-Big-Bang cosmology. However all these theories start from « something ». By getting closer to the origins, they simply accentuate the need for metaphysics, and approach Leibniz’s metaphysical question : « Why is there something rather than nothing ? »

In 1995, the first exoplanet orbiting a nearby star has been discovered through its perturbative effect on the velocity of the star. Since this pioneering work, more than 50 exoplanets have been detected, through the perturbation of stellar motions or transit in front of the stars, though none of them has been imaged yet. The surprise is the broad range of masses, distances to the central star and ellipticities that are displayed by these new objects. Most of them have masses comparable to a Jupiter mass or more, and it is still unfeasible to detect earth-like planets. However, such earth-like planets are becoming a major target for forthcoming satellites. There is no doubt that a significant fraction of the 10 22 stars in the observable universe actually have such planetary systems. What is the meaning of this huge population ?  From our experience in the Solar System, where space probes have surveyed planets and their satellites, we suspect that there is a large diversity of histories, properties and appearances among these planets. Suddenly, cosmology has opened a new window on an unexpected richness and complexity of the cosmos. Each of these planets, as well as the comparison of their properties and the elaboration of general rules about their formation and evolution, will be potentially a new field of investigation for science with the forthcoming improvement of observing tools, in particular with space interferometry. The existence of extraterrestrial life, and maybe the existence of extraterrestrial intelligence, now become scientific issues. The new « planetary cosmology » has an endless agenda of exploration. However, the possibility that other forms of life exist on other planets should not be interpreted as an argument against the spiritual importance and vocation of Man, as it is so frequently.


← From Puzzles to Metaphysical Issues 1/2
The Structure of Reality →