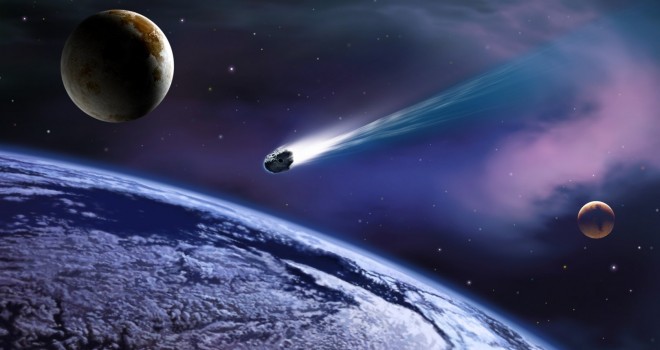 Dangers to Earth must be considered rationally

On February 15, one asteroid zipped past Earth at a relatively close distance, and by sheer coincidence, a large meteoroid entered the atmosphere and exploded above Russia. The asteroid, which had been monitored and its trajectory predicted for over a year, was 45 metres big and passed at a distance of some 28,000km. The meteoroid was 15 to 17 metres wide and exploded 20 to 50km above the Earth’s surface due to dynamic air pressure. More than 1,000 people were reportedly injured from shattered windows and other incidents, but mostly there was more panic than serious harm.

The first thing to emphasise is that the two events were totally unrelated. However, we humans tend to confuse simultaneity or even close chronology of events with causal relation. Furthermore, we tend to overestimate the risks of such events when two such occurrences happen close to one another, even for totally random cases. Indeed, we not only tend to dramatise such events (one newspaper described the first asteroid, which passed more than twice farther than the diameter of our planet, as “perilously close”), we tend to shift our attention from real dangers and risks to more unusual and impressive events, even though these are rarely ominous.

I do not want to give the impression that we should totally forget about “near-Earth objects” (NEOs) and asteroids with trajectories that cross the earth’s orbit. Some may indeed have a chance of striking Earth or exploding in the atmosphere and causing historic damage: The dinosaurs were exterminated from such a strike, some 66 million years ago; and 80 million trees were flattened in Siberia over a 50km-diameter area just a century ago (the Tunguska event of June 30, 1908). However, the dinosaur-exterminating asteroid was 10km across and the forest-flattening rock was about 100 metres wide.

Those few facts suffice to give us a rough idea about the frequency of the potential danger of such events — kilometre-size asteroids/meteoroids are exterminatingly dangerous, but exceedingly rare (one in millions or tens of millions of years); smaller ones, however, are much more frequent (a one-metre asteroid passed us by in February 2011), but almost all miss us by thousands of kilometres and the few ones that enter the atmosphere almost always end up exploding or disintegrating up above, still raining down small but harmful rocks.

These rare dangers are enough to have led several space agencies and a number of researchers to set up observational and tracking programmes for NEOs, for we do not want to take risks with even the rarest meteoroid that can be on its way from space with potentially devastating effects on human civilisation. We will then have to deal with them and there are several options for that, but this is not the object of my article.

Indeed, as I mentioned above, we need to be rational about dangers and risks, neither focusing on rare but stunning cases, nor forgetting more real and immediate dangers that we are responsible for and capable of addressing.

What are the more serious, widely threatening dangers that humans are facing for the nearer or farther future? A quick survey of the literature brings up a huge list and spectrum of issues, ranging from heat waves, droughts and floods, tsunamis and mega-tsunamis, to nuclear wars, genocides and bioterrorism. The list also includes global pandemics (from new viruses or mutated bacteria), global water crises (according to the World Bank, one to two billion people currently do not have enough water for daily needs), ecological disasters (pollution of all kinds, including toxic waste, ocean acidification, deforestation, loss of biodiversity, overfishing, etc), major volcanic eruptions (some of which could have such a huge effect on the global climate that it would endanger all humans and animals), worldwide breakdown of the financial system, global and severe economic recession and many others.

These dangers vary from “endurable” to “terminal” and range in scale from “local” to “global” and “trans-generational”, i.e. long-lasting. Indeed, the on-going and increasing loss of biodiversity (each day tens or hundreds of species disappear, producing chain effects on the whole biosphere), the damage to the oceans and the atmosphere, the over-consumption of natural resources (including water and oil) will all have long-lasting effects for future generations and for all of life on the planet.

Clearly these are pressing and at least as important, many of them much more, than any passing asteroid or exploding meteoroid, no matter how many windows one may shatter. But judging from the interest and response of the public, the media and the policymakers, one would get the reverse impression.

Most humans do not realise that they are prone to various reasoning errors and mental biases, including ones that make them focus on the rare and spectacular occurrences and ignore less visible but more important and demanding situations. Educators, communicators and other opinion-makers need to find a remedy to that.

And finally, addressing such problems requires decision-makers to make sure that politics and social factors do not trump evidence on both problems and potential solutions.