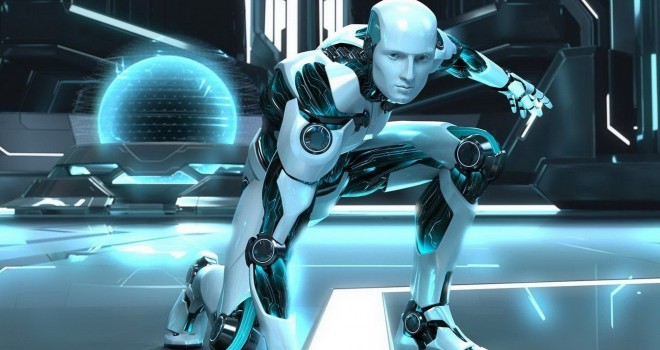 Are robots about to change humanity?

Last week, a video of a robot trying to stop penalty kicks from Lionel Messi, the best football player on the planet, went viral. The robot was a simple human-shaped wood board equipped with a camera and advanced software that allowed it to react to the shot as soon as Messi kicked the ball.

We have had teams of robots playing football (on small ‘fields’) for years now, but not against human beings. And the most striking feature of that viral video was the reaction of Messi, who got visibly irritated when the robot was able to block some of his shots and overjoyed when he could score. After defeating the world chess champion some years ago, machines are now challenging humans at their most popular sport.

When we think of robots, we tend to recall R2D2 and C3PO, the cute robots of the movie Stars Wars, or perhaps with last summer’s stunning Nasa achievement on Mars, of the car-sized robot Curiosity. Some of us may be aware of the many robotic household devices, such as ‘smart’ vacuum cleaners that are fast becoming quite prevalent. And those who work in factories will certainly be aware that many industrial chain processes (car assemblies, packaging of food items etc.) are now mostly performed by robots. In fact, the word “robot” itself was coined in 1921 by the Czech playwright Karel Capek from “robota”, meaning “forced labour” in Czech.

There are indeed tens of millions of robots in the world today. In the US alone, an estimated eight million households own a robot of some kind, some of which can now be controlled by smartphone applications. The current market for robots is estimated at tens of billions of dollars, which is expected to soon explode. As robot production costs continue to dive, these devices become smarter and more versatile and our needs for them become more pressing.

Besides the industrial or household usages, robots are also being used at the individual, personal level. They help feed physically handicapped people and provide assistance of various kinds, e.g. fetching books or other objects, setting and clearing tables, cleaning spaces and providing medical monitoring and assistance, as the appropriately named Care-O-Bot does. In Japan, where 25 per cent of the population is more than 65 years old, the market for robots is huge.

Most strikingly, robots are now used to provide psychological support and emotional comfort to people. We have all seen the variety of “robotic pets” that abound nowadays, starting with Tamagotchi, the rather simple (but cute) handheld digital pet that became a craze in Japan a decade ago. “Robotic dogs” have an entry on Wikipedia, with a listing of 20 such objects — some of which are described as showing “genuine reactions to sensory stimuli” and “feel[ing] joy and sorrow, anger and annoyance”. Google “mental commitment robots” and you will get some 15,000 links.

However, it is one thing to have a “smart” robotic pet that seems to display pseudo-emotions in relevant ways and it is something else to have the robots acting like humans. This is not science fiction; this is today’s and tomorrow’s world. Indeed, google “humanoid robot” and you will get more than two million results. Two years ago, a team at the UAE University produced a “Muslim humanoid robot” that was named Ibn Sina. It not only looked and walked like a human, it also talked like a human, responding with the aid of artificial-intelligence to human questions via a voice synthesiser. Moreover, it could recognise faces, understand people who speak, move to face them, gesture (shake hands and touch noses) and respond with full sentences in either Arabic or English. Connected to the internet, it could retrieve information for its purposes.

Progress in artificial intelligence is driving robots to a new level of intelligence and sophistication. Last year, a machine was shown to be able to “understand” a text by recognising phrases, sentence structures and speech patterns. Recently, programmes have been devised to read, “understand” and grade papers at the same level of accuracy as human graders, at least in the routine type of grading.

As this robot development continues, two important ethical issues confront us: How will they fit in our socio-economic lives and how will we relate to them emotionally.

Indeed, robots will soon be in a position to replace us in large swaths of human economy and other areas. As they already are better factory cutters and welders, they will soon become better surgeons, better servants and perhaps even better teachers. This will be the case when they become so well programmed as to be individually adapted to each of us, in our various needs of learning and other.

In This Will Change Everything, Sherry Turkle, a psychologist at the Massachusetts Institute of Technology, writes: “Over time, robots … will be preferable to an available human being …” She foresees emotional “relationships” that will be as strong as that which exists between human couples. Paul Saffo, a technology forecaster, speaks of “artificial companions” and asks: “Will they become so smart that they will no longer want to talk to us?” He realises that it is hard to imagine a world with super-intelligent robots and hopes we do not become their pets.

We are indeed at a crucial moment in human history: Artificial intelligence threatens to produce machines that will surpass us in too many ways; genetic engineering threatens to “upgrade” humans, which may perhaps help us compete with robots. Technology will soon challenge our ethics, indeed our whole sense of humanness.