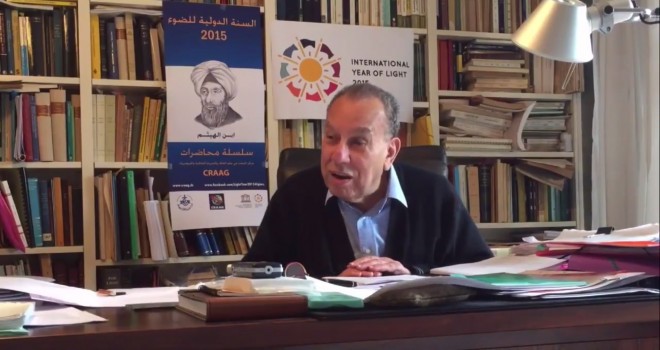 A Polymath in the 10th Century

The turn of the first millennium was a time of intense research in mathematics, physics, and astronomy. One scientist active and productive in all of these fields was Ibn al-Haytham, called by his successors of the 12th century “Ptolemy the Second.”

Ibn al-Haytham, also known as Alhazen (the Latin transliteration of his first name al-Hasan), was born in Iraq, most likely in Bassorah, in the second half of the 10th century. He arrived in Cairo under the reign of Fatimid Caliph al-Hakim, a patron of the sciences who was particularly interested in astronomy. Ibn al-Haytham proposed to the Caliph a hydraulic project to control the flow of the Nile—an early Aswan dam. The Caliph refused, but al-Haytham continued to live in Cairo, in the neighborhood of the famous University of al-Azhar, until his death after 1040.

Ibn al-Haytham was born after a century and a half of intense research in mathematics, astronomy, optics, and other physical sciences. Scholars such as Banu Musa, Thabit ibn Qurra, Ibrahim ibn Sinan, al-Quhi (1), and Ibn Sahl measured curved surfaces and solids, invented new geometrical methods, and rediscovered the method of integral sums. They combined mathematical and observational astronomy and formulated the first rigorous geometrical theory of lenses.

Beyond the biographic details above, little is known about Ibn al-Haytham’s life. But his contribution to science is not in doubt. His work on optics, which includes a theory of vision and a theory of light, is considered by many to be his most important contribution, setting the scene for developments well into the 17th century. His contributions to geometry and number theory go well beyond the archimedean tradition. And by promoting the use of experiments in scientific research, al-Haytham played an important part in setting the scene for modern science.

The ancient bibliographers cite at least 96 scientific titles under al-Haytham’s name; more than 50 survive. Half of his writings are on pure mathematics; 14 on optics, including the authoritative and voluminous Kitab al-Manazir (Book on Optics) (2–4); and 23 on astronomy. He also wrote about philosophy of mathematics, statics, hydrostatics, and various other topics, grappling with all mathematical sciences of his time except algebra.

Few mathematical and scientific writings in the Middle Ages have been as influential as those of Ibn al-Haytham, whose works were translated into Latin, Italian, and Hebrew. The Latin translation of his Book on Optics and On Parabolic Burning Mirror provided a basis for centuries of research in optics. His mathematical works influenced Roger Bacon, Frederick of Fribourg, Kepler, Snell, Descartes, and Huygens and many others.

In one of his many geometrical studies, al-Haytham calculated the volume of solids such as the paraboloid and the sphere. He used the method of integral sums and generalized one of the propositions in Euclid’s Elements. In another study, he set out to prove that among planar figures with the same perimeter, the disk has the greatest area, and among solids with the same total surface the sphere has the greatest volume. To study these problems, Ibn al-Haytham formulated the first known theory on solid angle, which leads to double integrals (1, 3). It was the most advanced mathematical work of his time, combining a projective method and an infinitesimal method.

Some of Ibn al-Haytham’s most important geometrical writings deal with the theory of conic sections. Apollonius’ Conics, written in the 3rd century B.C.E., were translated into Arabic in the 9th century A.D., but the last (the eighth) book had long been lost in the original Greek. Ibn al-Haytham devoted a substantial treatise to the reconstruction of this lost book. He also used conic sections to construct solid figures known since antiquity, such as the regular heptagon, as well as new ones (1).

Earlier mathematicians had concentrated on isolated problems of geometrical construction. Ibn al-Haytham showed that geometrical figures could be built systematically with the help of intersections of conic curves, and that these curves could be constructed from in a pointwise fashion and could also be drawn continuously. His studies of pointwise geometrical transformations led him to introduce the notion of continuous movement into geometry. He went on to develop the first concept of space based on geometry (1).

Ibn al-Haytham redirected geometrical research and obtained many results attributed by historians to his successors of the 17th century. But his work in optics was no less revolutionary. He changed the meaning of the term optics, and established experiments as the norm of proof in the field. The revolution entailed his division of optics into two parts: a theory of vision and the associated physiology of the eye and psychology of perception, and a theory of light that includes geometric and physical optics.

There had been a doctrinal contest between “extramissionists,” who postulated a visual ray produced by the eye, and “intromissionists,” who held that objects sent off forms or totalities that emanated from the visible under the effect of light. Ibn al-Haytham proposed instead that rays emanate toward the eye from every point of a visible object. Looked at thus, the eye becomes a simple optical instrument. Ibn al-Haytham then explained how the eye perceives the visible with the help of the rays emitted from all points.

His optical theories rested on qualitative laws and quantitative rules derived from experiments, which he performed with an instrument that he designed and built himself. On the basis of these experiments, al-Haytham was the first to propose a camera obscura. He also discovered spherical aberration, and gave the correct explanation of the moon’s light. Henceforth, experimental control was viewed not only as a general practice of investigation but as the norm of proof in optics, and more generally in physics.


← The length of the day of fasting
The Ambiguous Intellectual →