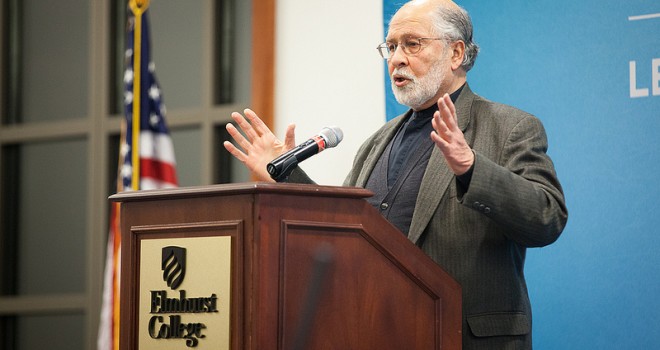 The Sacred versus the Secular: Nasr on Science 1/3

Nasr’s work on science is discomforting for many. His defense of traditional sciences is seen by his critiques as a nostalgic appeal to tradition with no real consequences for the current problems surrounding modern science. His unflinching attack on the philosophical foundations of modern science makes the modernists uneasy both in the East and the West. Furthermore, the evolutionary historians of science consider his notion of Islamic science too religious and metaphysical, suggesting instead a linear course of scientific evolution as if science without suppositions were to be possible. Part of this perturbed situation comes from Nasr’s rigorous assertion of the religious view of the cosmos at a time when religion as a valid source of knowledge is no longer taken seriously even by its sincere adherents. Sailing against the grain, Nasr offers no apologies for his resolute stance and insists on questioning the received meaning of science. Consequently, Nasr’s approach to science from a religious point of view suggests a new way of looking at the vexed question of religion and science. This essay, however, will confine itself to a critical analysis of Nasr’s concept of science both in its traditional sense and modern form.

A quick look at Nasr’s wide-ranging works shows that the question of science occupies a central place in his thought. Following a two-fold strategy, Nasr does not remain content with the critique of modern Western science, and presents his alternative view of science on the basis of traditional doctrines. The heavy emphasis put on the distinction between the traditional and the modern, or the sacred and the profane, runs through Nasr’s work which comprises many facets of traditional and modern sciences. A considerable number of his works are thus devoted to the exposition of traditional sciences, the metaphysical and cosmological principles on which they are based, and their meaning for a day and age that tends to see them as no more than superstitions and old wives’ tales. The second part of Nasr’s work is focused on modern science, its historical formation, its philosophical premises and claims, and the catastrophic events brought about by the unquestioned acceptance of modern science and technology. In both of these fields, Nasr stands out as a rigorous practitioner of the traditional school, and presents a profound evaluation of the traditional and modern natural sciences from the point of view of traditional doctrines. This can best be seen in his insistence on the necessity of scientia sacra and the revival of pre-modern cosmologies that the traditional civilizations have produced over the centuries. Being the application of a number of metaphysical principles expounded by the traditional school and especially by Rene Guenon, Nasr’s critique of modern science is accordingly motivated neither by a purely utilitarian impulse nor by a mere academic and historical interest. Rather, his uncompromising defense of traditional sciences on the one hand, and relentless attack on the philosophical claims of modern science on the other, is to be seen as an encounter between the traditional and the modern at the metaphysical level as it pertains to the domain of natural sciences.

It is, therefore, important to note at the outset that Nasr’s critique of modern science is marked off from the current criticisms leveled against modern Western science by its metaphysical and religious stance. According to Nasr, modern science is an anomaly not simply because we have to pay a high price by destroying the natural environment but because it operates within a seriously misguided framework in which everything is reduced to pure quantity and by which the modern man is made to think that all of his problems from transportation to spiritual salvation can ultimately be solved by further progress in science. The high cost of the scientistic fallacy is to make spiritual realities appear as unreal and redundant, or at least not relevant to the world-picture presented by modern science. In sharp contrast to this naïve belief in science and progress which has come under severe attack especially after World War II, Nasr aims at analyzing and questioning the very foundations upon which modern science as the pseudo-religion of the modern age is based. In this regard, one may argue that Nasr’s work is not so much concerned with the philosophy of science in the current sense of the term as with the metaphysics of science, viz. the metaphysical framework in which science, be it modern or pre-modern, is to be understood and given its due place in the hierarchy of knowledge. For Nasr, it is the availability or absence of such a metaphysics that makes science modern or traditional.

Thus, Nasr’s highly critical stance towards modern science can best be understood in the light of his notion of sacred science which might be described, very briefly, as an application of the One and the Absolute to the plane of relative existence. In fact, Nasr’s central claim that the rise of modern Western science is not the result of some ground-breaking advancements in scientific measurement but rather a direct consequence of the rise of a certain philosophy which underlies the formation of modern science from the 17th century onward can also be read as an extension of his view of sacred and traditional sciences which share a metaphysical outlook entirely different from that of modern science. To use a familiar distinction from the contemporary philosophy of science, Nasr concentrates his criticisms on the context of justification rather than on the context of experiment. In other words, Nasr’s work on modern science is not so much concerned with the actual conditions of scientific experiment and measurement, a subject dear to many scientists and philosophers of science, as with the larger framework of meaning in which the findings and the philosophical foundations of modern natural sciences are to be examined.

In what follows, I shall give first a brief description of Nasr’s defense of what he calls sacred science. By focusing on the concept of scientia sacra, we will be able to gain insight into the metaphysical framework in which traditional sciences, whether Hindu, Chinese or Islamic, were constructed and transmitted. The relevance of metaphysical doctrines of world religions for traditional sciences will thus form an important part of our discussion. The second part of the essay will focus on Nasr’s criticism of modern Western science which, in the eyes of Nasr, is the primary cause of the secularization and desacralization of the order of nature. It is, however, extremely important not to lose sight of the fact that Nasr is not opposed to science itself but to its philosophical claims that apparently exceed its legitimate boundaries. Keeping this in mind, our analysis will also provide us with a chance to distinguish between the philosophy and metaphysics of science with which Nasr’s work is primarily concerned.

By Ibrahim Kalin, to be continued…


← Jim Al-Khalili calls for scientific Arab Spring
The Sacred versus the Secular: Nasr on Science 2/3 →