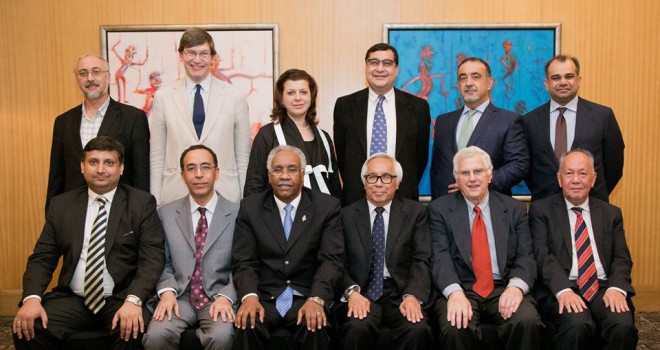 Science at Universities of the Muslim World

At universities of the Muslim world, how is science taught and practiced? How effective are Islamic world universities at scientific research, education and public outreach, and how could those functions be improved? What factors affect science-related policies (basic vs. applied, research funding priorities, promotion, etc.), and to what extent have international university rankings influenced those policies?

Offering insights and recommendations on those questions and others is the mandate of a 13-member international Task Force on Science at Universities of the Muslim World, convened for the first time last week in Malaysia.

The group of eminent experts from seven countries is scheduled to report next June and will seek partners to implement its recommendations.

This task force initiative, launched by Muslim-Science.Com (an online platform and portal dedicated to a revival of science and scientific culture in the Islamic World), seeks to jumpstart dialogue, discourse, and debate on critical issues and big questions at the intersection of science and religion within the Islamic world.

“There is simply no conversation or discourse around some of the most critical aspects of science and society within the Islamic world,” said Dr Athar Osama, Founding Editor and Publisher of Muslim-Science.Com, in a statement today. “Without addressing these in a critical manner, we will continue to approach science in a piecemeal fashion without really making our mark on its development or fully benefiting from this activity,” he added.

Dr. Osama also said: “Till now there has been virtually no conversation around highly important issues of science and society within the Islamic world. Without addressing these in a critical manner, we will continue to approach science in a piecemeal fashion without really making a mark in this area or benefiting from science development.”

At the seminal meeting of the Task Force, held in Kuala Lumpur, Malaysia on 15-16 December, Tan Sri Zakri Abdul Hamid, science adviser to Malaysia’s Prime Minister and chairman of the task force, noted that science and technology in member states of the Organisation of Islamic Cooperation (OIC) has generally lagged behind other parts of the world. Indeed, according to UNESCO data, the average spending on science in OIC countries is only one per cent of the national budget. Latest data from Thomson Reuters indicate that only 5 of the 57 OIC member states have highly cited researchers in the world.

Tan Sri Zakri Abdul Hamid, the chairperson for the Task Force, reiterated the importance of kicking off this initiative: “We hope this Task Force will bring forth a consensus that could lead to policy action across the Islamic World. We are being left behind in the mastery of STEM (science, technology, engineering, mathematics), and reforming science education is the way to alleviate the situation.”

Prof. Zakri added: “It is vitally important that the Islamic world critically evaluate its own weaknesses and strengths in this important area by bringing together a diverse group of experts and stakeholders and creating a discourse driven from inside. We hope this Task Force will find a consensus that leads to policy action across the Islamic World.”

In their two-day meeting, the Task Force experts have urged Muslim countries to reform their science education at the university level in order to boost scientific and technological advancement, improve their economic development, and raise the culture of science in their societies.

Nidhal Guessoum, convenor of the task force and a physics professor at the American University of Sharjah in the United Arab Emirates (UAE), pointed out that the Islamic faith cannot be blamed for this situation because the situation varies largely among Muslim countries on various indicators.

“The relative weakness of our institutions of higher learning, particularly in science, cannot be always attributed to lack of funding or inadequate administrative systems; pedagogy and other factors need to be investigated. This project is both highly pertinent and timely,” said Prof. Guessoum.

Guessoum believes the problem lies more in the pedagogy or the way science is taught in the universities of Muslim countries, and this may include: the teaching competencies of the instructors, the language of instruction, the appropriateness of the textbooks, the learning methods and tools, etc. He noted that the pedagogy that is currently used needs to be urgently evaluated and improved upon, with an emphasis on critical thinking and inquiry-based learning.

Regarding the curriculum, Michael Reiss, a science education professor from University College London, said that Muslim countries should broaden the contents of the science program in their universities by including relevant topics such as the history and philosophy of science.

“Historically, we know that science hasn’t come solely from the West but also from the Islamic world and China. By understanding how knowledge is built, it is easier for students to understand what science is,” said Reiss.

Members of the task force will finalise their recommendations on science education in June 2015 and submit these to the OIC as well as the education ministries of all Muslim countries.

The list of the Task Force members with their credentials can be found here: http://muslim-science.com/task-force/

This article is a compilation and synthesis performed by Gillali Abdelaziz and reviewed by Pr. Nidhal Guessoum.