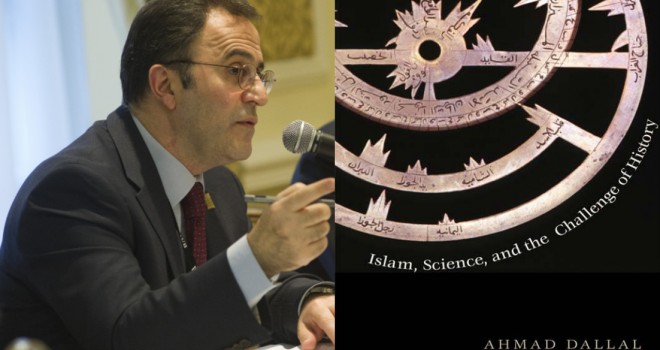 Review of Dallal’s “Islam, Science, and the Challenge of History”

Few years ago, the Journal of Islamic Studies (JIS, Oxford) published the rather long review it had asked Professor Nidhal Guessoum to write about Ahmad Dallal’s book “Islam, Science, and the Challenge of History”, which was published in 2012 by Yale University Press.

Dallal is a historian of science who has specialized in Arab-Islamic heritage. He is currently provost of the American University of Beirut (AUB), having gone there in 2009 from Georgetown University in Washington, DC, where he served as the chair of the Department of Arabic and Islamic Studies. He had previously held academic appointments at Stanford University (2000-03), Yale University (1994-2000), and Smith College (1990-94).

The AUB short biographical sketch of Dallal (dead link) describes this new important book, which is based on the Dwight H. Terry lectures that he delivered at Yale University in February 2008, as “trac[ing] the historical delineations between scientific knowledge and religious authority in Muslim societies.”

I cannot reproduce here my long review of the book, for copyright reasons, and the full text is only available for subscribers on the JIS website; the journal makes an “extract” available here, but it is only two paragraphs long.

The first paragraph is the opening of my review:

I often describe the field of ‘Islam and Science’ as a cultural and intellectual space in three dimensions: a) the historical developments of science during the Islamic civilization; b) the conceptual discussions of conflict, harmony, or separation between Islam and modern science; c) the issues of practical application of science in Islamic life (ranging from the calculation of prayer times to in vitro fertilization and euthanasia). Ahmad Dallal’s book, though rather concise, manages to encompass all three dimensions in a grand narrative and with a bold thesis. Indeed, while surveying the major trends of scientific activity from its emergence in the early Islamic civilization to the present time, he takes special interest in at least one specific case of application of science and intersection with religious rules (the direction of the qibla), and by the last chapter he dabbles in the conceptual issues raised by Darwinism and ‘the new astronomy’ (i.e. the heliocentric revolution).

But for the benefit of the readers of Irtiqa, let me add a couple of paragraphs (as a bonus) to help give an idea of the book’s thesis and the extent to which Professor Dallal has been successful in convincing his readers about it.

The thesis he is attempting to prove, however, is never stated clearly, but any careful reader will figure it out, especially since Dallal attempts to draw conclusions toward it at the end of each chapter. What he tries to show is that science in the Islamic civilization slowly but successfully was extricating itself from the double embrace of (Aristotelian) philosophy and religion. Dallal clearly believes that any link, whether strong or weak, made between science and religion or philosophy is counterproductive and regressive. He writes: “Yet while religion dominated the moral sphere and claimed a higher rank there […], it did not exercise an epistemological hegemony over science” (p. 147); “[w]hen Muslims were the main producers of science in the world, they did not advocate wedding science and religion” (p. 170).

In summary, this is an important book, with a grand narrative and a bold thesis. It is very well written, though one can find weaknesses, biases, or short-cuts here and there. It is an important book precisely because it proposes a viewpoint: separation between science and religion, and even philosophy, is not only the correct course to follow but also the historical path that Muslim thinkers took over the global Islamic history. This thesis needs to be discussed and examined in light of the historical record, a fuller treatment which looks at many more viewpoints and avoids any swift generalizations. Dallal is still to be applauded for having produced an essay which forces us to think and argue the merits of his views.