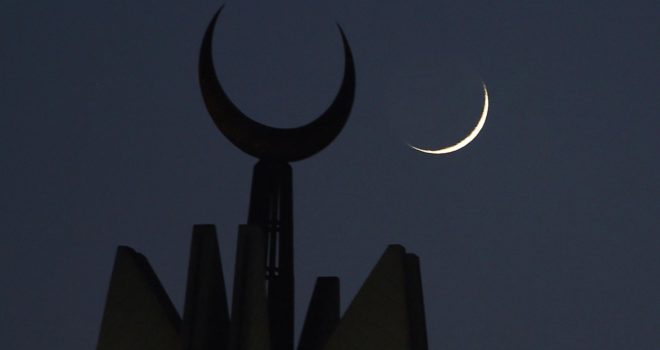 The problem is that Ramadan, like all lunar months, begins the day after the first sighting of the sliver-thin new crescent moon, visible by up to an hour after sunset on the appropriate evening. The orbit of the moon around the earth is such that it can take up to three days for the whole world to actually see the crescent for the first time each month, even after clouds have cleared. But in an age of super-computer calculation and instant telecommunication, should this present such a problem?

It is extremely ironic, not to say embarrassing, that the Muslim people, who led the world for a millennium in every scientific discipline, developed the scientific method itself and taught it to the west, are still in a state of chaos over a relatively simple matter of science and religion, ie the lunar calendar.

A millennium ago, the Persian scientist and philosopher al-Biruni calculated the circumference of the earth with over 99% accuracy. Even earlier, the astronomers of the caliph at Baghdad had first measured the tilt of the earth’s axis as being 23.5 degrees. Most of the major stars in the sky still carry Arabic names, for the Muslim civilisation took the Greco-Roman constellations and added invididual star names as part of their development of the knowledge of the ancient world before transmitting it to the modern one. Ptolemy’s great works of astronomy, like the philosophical ones of Plato and Aristotle, largely reached Europe through Arabic translations.

There are many factors contributing to this confusion. Apart from religious and political disunity, perhaps the biggest reasons are the gulf between science and shariah and the simplistic, literalist approach to shariah that characterises much of Muslim religious discourse and ignores the magnificent theory of maqasid al-shariah, or the higher objectives and spirit of the sacred law of Islam.

Muslim scientists and experts in law (shariah) need to understand each other’s disciplines, and we need more individuals who are well-versed in both areas, as we had for centuries. For example, the 14th-century theologian Ibn Taymiyyah was an expert in the astronomy of his age, effortlessly discussing difficult and technical astronomical terms such as conjunction, the “arc of light” and the “arc of vision” as well as factors affecting the visibility of the new moon such as the angles between moon and sun, moon and earth and even factors such as atmospheric humidity. All this, of course, in addition to his renowned expertise in the traditional Islamic sciences.

This great scholar, writing seven centuries ago, correctly concluded that astronomical calculations could not be used to replace naked-eye sighting of the moon because, during his lifetime, no one could calculate the visibility of the new moon accurately. However, 700 years later, many traditionalists erroneously and anachronistically cling to the view of this great authority, or that of earlier expert astronomer-jurists, whilst ignoring the fact that science has progressed exponentially since then and that we are now able to confidently predict the visibility of the new moon with great precision.

Experts in the maqasid al-shariah, the theory of the holistic intent of Islamic law, agree that calculations can obviously be used to replace and confirm naked-eye sightings of the new moon, and to reject impossible claimed sightings. One leading Islamic scholar, Ahmad Shakir, argued this as far back as 1939, except that he advocated using conjunction (the birth of the moon) instead of crescent-visibility as the starting-point of the new lunar month: visibility calculations were not accurate enough in his time, and have only become extremely precise over the last few decades.

Contemporary experts in progressive interpretations of shariah agree that calculations of crescent-visibility can now be used to replace naked-eye sightings of the new moon. Those who disagree with this are unfortunately stuck in literalist approaches to shariah and the classical schools of Islamic law, arguing over individual texts from the Qur’an, Hadith and mediaeval books of Islamic law while forgetting the bigger picture, the holistic approach to the subject embodied in Maqasid theory and developed by the great scholars such as Ghazzali, Ibn Taymiyyah and Shatibi.

The problem may be illustrated with the the Prophet’s teaching (peace be upon him), “Begin fasting when you see the new moon, and end fasting when you see the new moon.” The opponents of calculation rigidly stick to a literalist interpretation of this instruction, insisting on physical sighting even when official declarations of moon-sighting are known to be flawed in many Muslim countries and when calculations give us a much more precise answer. They also forget that their mode of reasoning could equally be applied to the verse of the Qur’an (The Cow, 2:187) about fasting: “Eat and drink until the white thread of dawn becomes apparent to you from the black thread [of night].” Clearly, dawn only “becomes apparent” to us by physical sighting and therefore it could be argued that one cannot use calculations to determine prayer-times. Amazingly, it is not uncommon to see people going by clocks and timetables for prayers all year round, yet becoming extremely animated about rejecting calculations for the dates of Ramadan.

Although it is true that physically seeing the dawn, sunset, new moon and other astronomical phenomena helps to keep us connected to the signs of God in nature, insisting upon this for everyone is not realistic in the modern world and does not offer practical, pragmatic solutions for modern societies dominated by clocks and calendars. The literal meaning of the above-mentioned prophetic teaching would still apply to people wishing to remain as connected as possible to natural cycles, while its interpretation from a maqasid viewpoint in modern society, especially for governments and religious authorities, would be, “Base your worldwide, calculated lunar calendar on the visibility of the new moon.”

Bringing shariah into line with modernity and science using intrinsic Islamic principles of interpretation is an urgent need of our times. From human rights, especially those of workers and women in the Muslim world, to the place of faith and religion in modern societies, much progress can be made if we move away from literalist interpretations that fail to understand the nature of the modern world. As a symbol of Islam, the crescent moon is probably apt at the moment: it inspires chaos and disunity. But the good news is that moves to harmonise religion and reason, the sacred and the secular, are gaining momentum in the Muslim world. We can only hope that the clouds of confusion continue to clear and that the crescent moon will once again symbolise, not chaos and fragmentation, but enlightened Islamic contributions to humanity.

By Usama Hasan, published in The Guardian, September 1st, 2008.

← Nature’s laws according to Ibn Sina