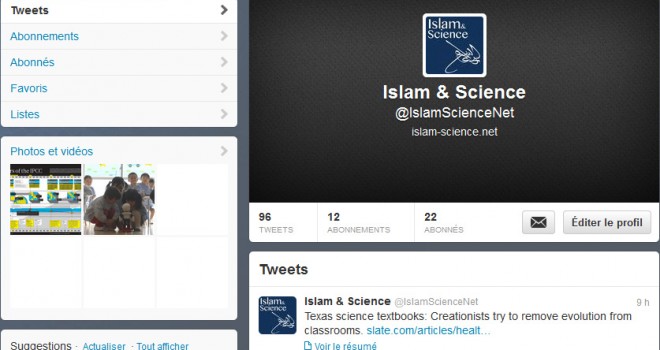 During a recent Friday sermon, a young Muslim sitting next to me took out his Blackberry and started to check his messages (while the Imam was giving his speech). I was quite stunned. The young man then put away his smartphone, but 10 minutes later took it out again and typed a few things. That gave me a good indication of both his (short) attention span and the addiction to cyberspace that youngsters have fallen victim to these days.

I could not shake off this little scene from my mind, so I later googled “Twitter and religious services”, and lo and behold, I found pages titled “Tweeting during church services gets blessing of pastors” (an article in the Houston Chronicle two years ago) and “Does God Tweet?“, an online forum organized by the Washington Post two years ago, where 16 contributors presented their thoughts on whether a relationship with God can be established through Twitter. Can prayer be reduced to a 140-character statement? Can we no longer free our minds, quiet our inner selves, focus on our spiritual dimension, and establish a meaningful religious state of being?

I thus wondered how Twitter, Facebook, and current and future social networking and micro-blogging tools will affect religions in general and Islam in particular. My worries were heightened when I found an article titled “25 Reasons Why Twitter Is Spiritual,” but none of the reasons were remotely convincing.

Facebook poses another set of challenges and concerns for Muslims. First and foremost is the freedom of speech that either can be much greater than many Muslims are accustomed to (in their countries) or can be abused to the point of becoming hate speech. There have already been a number of instances where a page was set up to publicly and crudely “criticize” Islam, and last month an Egyptian was jailed for “insulting Islam” on Facebook.

In reaction to this, some Muslims have either waged Facebook-boycott campaigns or just went ahead and created Muslim social networks, e.g. Muslimsocial.com, Muxlim.com, or Naseeb.com.

Other concerns that many Muslims have with Facebook relate to the loss of “virtual modesty,” of “correct behavior” and of privacy. The concern over “modesty” refers to images that can be deemed indecent. “Correct behavior” decries the loss of inhibition that people exhibit online, often in stark contrast to their everyday personalities, and the hypocrisy of voicing views online that are quite different from one’s beliefs and practices in “real life”. And the issue of privacy online is well known.

Finally, there is the huge problem of time waste in social-networking activity. Two years ago, a study was conducted among evangelical Christian college students; these were found to spend an average of 18.6 hours a week on social media, half of that on Facebook. Interestingly, 54 percent of these religious students reported that “they were neglecting important areas in their life due to spending too much time [on that activity].” On the other hand, 43 percent of the students stated that this helped alleviate stress in their lives, and 35 percent reported that their social relationships were improved by that. The authors of the study warned against the negative impact that this time waste will have on the religious activities (prayer, Bible study, attending services, serving others, etc.) of the users of social media.

And indeed, as I mentioned in my last column, an important Iranian cleric recently warned his students of the “dangers and temptations” of the Internet and advised them to “spend more time praying and less time clicking through cyberspace.”

Two conferences have recently been devoted to exploring the impact of ‘new media’ on the discourse among Muslims (worldwide) and with other religious communities (interfaith dialogues).

Last April, an online “conference” was organized on “The Future of Islam in the Age of New Media,” which consisted of 60 speakers, who each spoke for one minute on the topic. Most of the speakers spoke enthusiastically about the effects that the new media are having on the Islamic discourse and culture. Some participants, however, expressed some interesting concerns.

The most important effect that was highlighted is that the new media are allowing a larger exposure of ideas regarding Islam and giving people new freedoms to discover or express thoughts that have often been hidden from view. Muslims are becoming more aware of the diversity within their tradition and can now shape their opinions in a more informed way. This democratization of the Islamic opinions, however, has turned into a “fragmentation,” a plethora of views with no core or reference frame. Moreover, a “ghettoization of views” has occurred (as has been observed with other obscure views or groups): liked-minded people linking up and reinforcing each other’s views.

There is also much greater female participation in the discussions concerning Islam, as Muslim women have avidly taken to blogging, even in the more conservative countries.

The new media also offer interesting opportunities for exchanges with “others,” a chance to counter Islamophobia or just plain ignorance, provided that one gets out of his/her “ghetto” or bubble of similar views.

However, one must be careful not to give these new tools more credit or power than they actually have. After all, only a small fraction (10 to 15 percent) of Muslims worldwide has access to the internet, according to the 2011 Global Information Technology Report. Moreover, the internet and the new media, require a certain level of education and sophistication. Thus, the impact that the new media are having on Muslims’ views and understanding of their religion is — for now — largely confined to the well-educated segments of society.

The organizer of this online conference has now started a second phase of the project, where some of the speakers are brought back for more in-depth interviews. They will be exploring the main themes that emerged in Phase 1.

The other conference I wish to highlight is one that was recently devoted to the exploration of the effect of social networks on interfaith dialogues: “Social Media and Inter-Religious Dialogue: A New Relationship,” which was organized in October 2011 in Doha, Qatar.

The conference aimed at addressing a number of themes, including: social media as a tool for dialogue instead of hateful attacks, and how to develop religious frameworks and ethical regulations to protect society from the misuse of these tools — a ‘Global Code of Conduct’ for respecting sanctities and religions.

Clearly, the new media and social networks have created a new dynamic within religious communities, including Muslims. Some effects are already being felt, both in the practice and in the formulation and understanding of the religion itself. This is one of the most important developments of our times.

By Nidhal Guessoum, published in The Huffington Post, November 29th 2011.