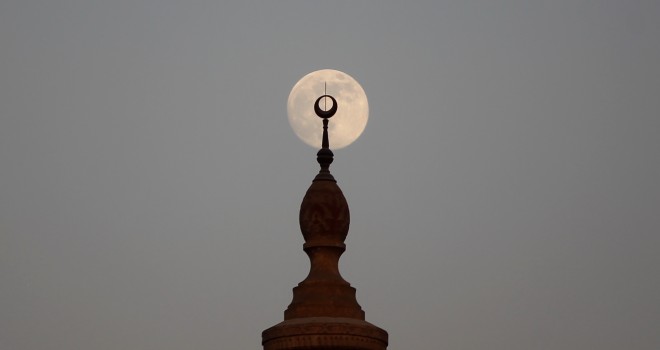 Ramadan is the ninth month of the Islamic lunar calendar. Astronomically, the lunar month begins when the moon crosses the Earth-Sun direction (a position and moment known as “conjunction” or more commonly “new moon”), but Islamically, the month begins when the moon can be seen as a thin crescent, a day or so after the new moon. And since lunar months are either 29 or 30 days, Muslims have traditionally gone out on the evening of the 29th of Shaaban, (the month preceding Ramadan) to try to sight the crescent and thus start the holy month.

This approach, which was advocated by Prophet Mohammad (PBUH) for its simplicity, soon proved to have its own limitations and drawbacks. First and foremost, this approach does not allow one to plan ahead, as one must wait for the 29th day to know whether the next day will be the 30th of that month or the 1st of the next month. But calendars are definitely needed for any society to organise its affairs, including meeting dates, holidays, travel needs and financial transactions. And indeed, Islamic civilisation soon developed calendars (such as the “arithmetic calendar”, alternating 29 and 30 days, but determining through a complex rule whether the year will be a regular or a leap year, totalling 354 or 355 days), at least for civil purposes.

Another problem that soon appeared was whether different regions should start a month together, or keep to each other’s own crescent sightings and thus different Ramadan starts and ends. Indeed, if a crescent was seen in Damascus, people in Madinah could not (in the old days) be promptly informed about it, but it surely didn’t make sense that nearby lands would have different months and religious occasions, especially when Haj (the 10th day of the last month of the year) is common for everyone (in Makkah).

Determining when a crescent can be seen is an old astronomical problem that goes back to the Babylonians, who had figured a simple rule: the crescent will be seen on the 29th of a given month if the moon sets at least 48 minutes after the sun. And since the positions and motions of the moon and the sun could even then be calculated quite well, astronomers could predict how much “lag time” there would be between the moon and the sun and hence whether the crescent would be seen.

The problem was also taken up by Muslim astronomers, including the illustrious Al Khwarizmi (9th century), Al Battani (9th-10th century), Ibn Yunus (11th century), and Al Tusi (13th century), and they came up with prediction criteria based on the angle between the moon and the sun in the sky (9 to 11 degrees) on that evening.

During the 20th century, more sophisticated approaches were developed, with seminal contributions by western astronomers, such as Andre-Louis Danjon, Franz Bruin, and Bradley Schaefer, and Muslim astronomers such as Mohammad Ilyas, with the introduction of astrophysical considerations such as the contrast of brightness between the moon and the background sky at each instant during the evening of observation.

All this has helped cut down on the high rate of mistakes made by people when trying to sight the crescent. Studies showed that in the second half of the 20th century, error rates ranged between 50 and 90 per cent. New, thin crescents are indeed notoriously difficult to see, especially in places with lots of sand and dust, pollution or humidity. Science then helped sort out erroneous reports from correct ones.

Still, the problem of the calendar remained; knowing ahead of time when Ramadan would start or end, which has important socio-economic consequences. Islamic scholars had to address the fundamental question: can the Prophet’s (PBUH) directive to start the month after sighting the crescent be replaced with a (more reliable) scientific approach, such as constructing a calendar based on crescent visibility? A majority of Muslim jurists still insist on the old tradition, although an awareness of the importance of the question, along with the progress that has been made in the science of spotting the crescent, has been growing.

Indeed, just a week ago, an international conference was held in Istanbul on precisely the question of the Islamic calendar (its bases and best formats), with the participation of dozens of Muslim jurists, astronomers and opinion makers. It concluded with a set of resolutions resoundingly endorsing the principle of a calendar for both civil and religious purposes . It is not clear whether Muslims will widely and quickly embrace this approach, but once they do, it will constitute a significant development in the history of Muslim society.

There is no doubt in my mind that this is the way to go. The adoption of a scientifically rigorous and reliable method to determine crescent-based months is long overdue. Muslims can continue to go out on the evening of the 29th to honour the Prophet’s (PBUH) tradition of sighting the crescent, but they need to know ahead of time when the month will start to be able to plan their lives correctly.


← Rebuilding the Muslim House of Wisdom
Ramadan: A Good Time To Recall A Forgotten Doctor‏ →