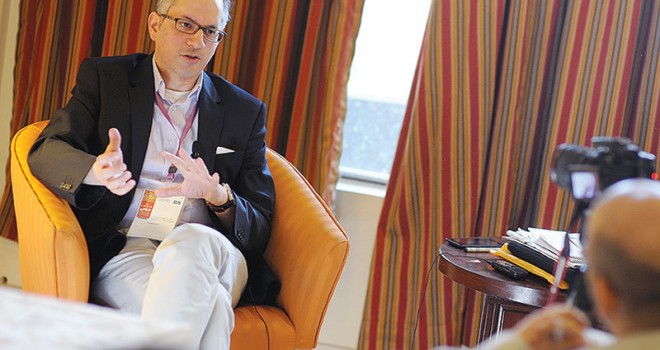 Change is the only constant

A talk with author Ehsan Masood on evolution and Islam turns into a discussion of the evolution of Islam.

Instead of critically questioning religion, what we are taught (in countries such as Pakistan) is that one interpretation is the final word. We’ve never been taught that human interpreters of the Quran and the Hadith have always differed, and still differ. It’s just that we don’t have the conditions where those differences are allowed to bubble up to the surface and explain themselves.

I was born into a Muslim family, I am a Muslim myself, but because I am privileged to be in a public space where I am allowed to think aloud and ask questions, I have always been fascinated by what it means to be a Muslim in the modern world today. Differences (of interpretation) have always existed but the institutions where those arguments and conversations used to take place don’t exist any more.

One of the reasons these institutions do not exist is because colonisation interrupted the flow of argument and the conversations happening between Islamic scholars. A second reason is because the post-colonial state stopped being neutral.

Where we stand now is with interrupted institutions: in countries like Pakistan, there is very little indigenous legacy of knowledge. There is a lot of imported knowledge still coming in, but the base on which knowledge has to be built is quite shallow, and really that’s what an Islamic legacy of knowledge is being built with.

The evolution question has always been incredibly contested (in the Muslim world). But evolution happens, there is more than enough evidence. Not believing in evolution is like saying, I deny gravity or that I deny the existence of planets. I can still be a believer, or not — as the case may be — but these things shouldn’t really be muddled up.

In 2009, on the 200th birth anniversary of Darwin and the 150th anniversary of his book, On the Origin of Species, I wanted to remind our Muslim readers that especially now, given where we are on this question, evolution is not a new thing. My Guardian article Islam’s evolutionary legacy encourages people to look into Islamic history a little bit, so that we can begin to understand that there wasn’t this knee-jerk reaction to new developments. There was a spectrum of reaction to Darwin — from acceptance to scepticism to outright rejection. Now, it’s much more weighted to rejection.

In Islamic history, there was always a spectrum of belief. There were people who were willing to push the envelope and challenge. Then there was a big bulky middle —who, perhaps like today, are neither here nor there, not interested in particularly questioning anything, and as long as we just let them get on with their life they are quite happy to be who they are. They aren’t necessarily interested in critical inquiry, but just happy to go with the consensus. That’s quite an important group. And then you have another, maybe smaller group, whose view was that you are a heretic if you ask any awkward questions or if you question anything.

The difference between then and now is that somehow this third group has all the power, and that includes state power. Another difference is that we live in an era where the state is possibly much more powerful and intrusive in the lives of citizens. In earlier Islamic times, the state did protect the right of people to say and do what they thought. Sometimes, the state was so rationalist that it used extreme measures to protect the right to dissent against the mainstream consensus.

For anyone in the business of knowledge-creation it is clear that the state has to be the protector. The state can’t take sides, it can’t become sectarian and it has to rise above all differences. In countries like Pakistan, for example, the state also has an opinion. It has become a participant in the internal squabbles or arguments of its citizens, when that isn’t its role.

This intrusion can be problematic because the state is no longer protecting everyone’s right to believe what they want, but is only acting in the interests of a certain group. The state has to rise above that, because we have a compact with our governments: we pay our taxes and in return, we have certain rights. We also have certain responsibilities. And that compact allows us (citizens and governments) to function the way that we do.

The role of Saudi Arabia, I think, is very important, because Saudi Arabia is a hub of a particular way of looking at the world. If it was just simply that, it would be fine. But it also has a lot of money. It isn’t just Pakistan, it has gone all over the world, building mosques, publishing — the publishing activity of the Saudi state and the Saudi private sector and the Saudi non-governmental sector are already quite astonishing. They are busy and actively propagating one very narrow way of interpreting Islamic thought.

This is a problem because if you are a poor or relatively poor community somewhere, and you need funds to build your mosque or madressah and the main source of funds is coming from here and there are strings attached, clearly that can be quite problematic.

I just think that what we are now seeing is the fruition of probably 20 or 30 years of activism from Saudi Arabia. This hasn’t happened overnight, has it? So the Saudi state and its institutions have been funding and promoting and doing everything else since the 1970s. It’s only now, after two or three generations, that we are seeing this influence for what it is.

The Sunni world’s great claim is that theirs is a very democratic approach, that it is not hierarchical and doesn’t have the clergy of, for example, Shiism or Catholicism. Here, everyone can be their own scholar, as long as you have a certain minimal level of knowledge. This is a very interesting way of looking at belief and practice.

The downside with the Sunni world’s way of doing this is that there hasn’t been any institution building. Because we all are our own scholars why should there be any seminaries or theological training or research?

The Shia world has always been much better at knowledge production, and Iran particularly is a fascinating place for the study of science and technology and faith and learning and ethics. Because they have had a quite isolated period, they’ve been allowed to do it without a lot of involvement from outside, so they can really drill deep. They have had longer to manage their own affairs, have internal institutions and are not so beholden to outside voices. Iran also does a lot of very advanced human genetics work, but because it’s a theocratic state, it has gotten its institutions working with the medical profession in quite interesting ways.

Contrast this with the United Kingdom, for example. Anglican Christianity is an established religion, and in effect, is part of the ruling system. We have bishops in one of our houses of parliament, in the House of Lords, the church is called the Established Church, and the Queen is the head of the Church of England. There are all kinds of myriad interconnections between church and state which are often not understood by everybody and they are certainly not often talked about.

The state and the church have had centuries of relationships and tensions, but they have now reached a point where the Church is effectively saying that it is the servant of the people. And whatever the people decide, whatever social norms there will be, it will adapt its theology and it will make allowances.

So, all the debates we are having about, for example, gay marriage or about the representation of women in the clergy, are all because of that compact between church and state, where the church has recognised that the state is the primary actor and the church is a part of that system. It’s got a very privileged position — don’t get me wrong — it’s a very privileged position in that system, but the church recognises that it mustn’t overstep the bounds of the authority given to it by the state, and ultimately by the people.

And in so doing, the church is quite happy to have very noisy, very argumentative debates about all the things that I talked about. But it’s a conversation that is mediated in that way, because everybody knows where they stand.


← New moon on the horizon: An astronomer’s guide to solving the start of Ramadan
The problematic relation between Islam and Science →