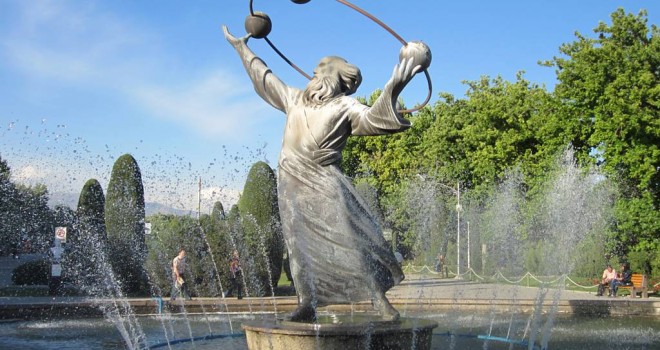 What the history books left out

Does Islam’s vibrant scientific past hold the key to its intellectual future, asks Ehsan Masood

Review – 1001 Inventions: Muslim heritage in our world: an exhibition at the Museum of Science and Industry, Manchester, UK, to 4 June 2006

IT still comes as a surprise to discover how many children (and their parents) think that modern science is a European event, starting with the Enlightenment. Perhaps those inclined to such Eurocentrism should be packed off to the north of England to see an ambitious exhibition. Teasingly called 1001 Inventions, it may go some way towards filling in what the curators call “1000 years of missing history” by showing the role of Islamic-era science in shaping the modern world.

It might also help see off easy talk of “civilisations in collision”. The fact is that by the 12th century the Islamic empire covered a swathe of the world from Spain to Indonesia and, as with all civilisations, expansion drove scientific excellence. The exhibition captures a time when states governed by sharia law no less produced world-class innovation by scientists and translators who were Christian, Jewish, Muslim and Zoroastrian.

As with modern science, much of their research was dictated by practical need. One catalyst for developing clocks, for example, was the need for mosques to announce accurate times for the five daily prayers. Similarly, administering a large empire required postal systems, good maps and surveying techniques, research into common diseases, intensive farming and irrigation – not to mention more effective weapons of war. It also drove serious amounts of fundamental research into astronomy, chemistry and mathematics.

There were also breakthroughs that were, just as they are today, pure serendipity. One of my favourites is the story of coffee. Discovered accidentally by a livestock farmer from Ethiopia, it was embraced by the Sufis of Yemen to help them stay awake at night, and brought to London in the 17th century by a Turkish merchant. Even the word derives from the Arabic kahwa. Arabic was very much the language of culture, administration and research. Most strikingly, as the exhibition shows, some scientific English words have Arabic roots: chemistry (kimia), algebra (al-gabr), and alkali (al-qaly).

This is all excellent. But what 1001 Inventions doesn’t do is explain what happened next, and why there is so little highquality science and learning in Muslim countries today. Indices of patents and research publications make it clear that countries with mostly Muslim populations rate poorly for generating new knowledge. They have produced just two science Nobelists: Egypt’s Ahmed Zewail for chemistry and Pakistan’s Abdus Salam in physics, and even they won their honours at western universities.

Today, Islam has a record number of followers: one-fifth of humanity is Muslim. Moreover the Koran is rare among religious texts in explicitly telling readers to go learn, study and think about the nature of the world around them. If Islam inspired great learning in the past, why not now?

Perhaps one answer is crudely financial. Science needs money, but today’s Muslim states spend on average 0.2 per cent of GDP on research and development, compared with a developed-world average of more than 2 per cent.

A second answer lies in the fact that Islam’s scientists of old were aware that science is a process. They understood that innovation is underpinned by knowledge of what happened before, and were voracious consumers of knowledge from ancient Greece, for example. Today, knowledge of the latest research is found in Europeanlanguage scientific journals. In Muslim countries, only a few elite universities have good access to the top journals, and translations from European languages into Arabic are pitifully rare.

Lack of encouragement for critical thinking is also a big factor. Scholarly debate and criticism flourished in the old Muslim world: it was possible to publish many things which today would result in an appointment with the censor – or even prison or exile. High-quality research needs a level of freedom to think, speak and publish that does not exist in many Muslim countries.

Commitment to a faith can be a strong catalyst for scientific excellence, but perhaps the overriding message of 1001 Inventions is that the freedom to push boundaries and to challenge dogma is an irreplaceable ingredient.

Ehsan Masood is a writer specialising in science in developing countries. See www.1001inventions.com for further information on the exhibition


← Science in the Muslim World
Islam and Science: concordance or Conflict? By Prof. Abdus Salam →